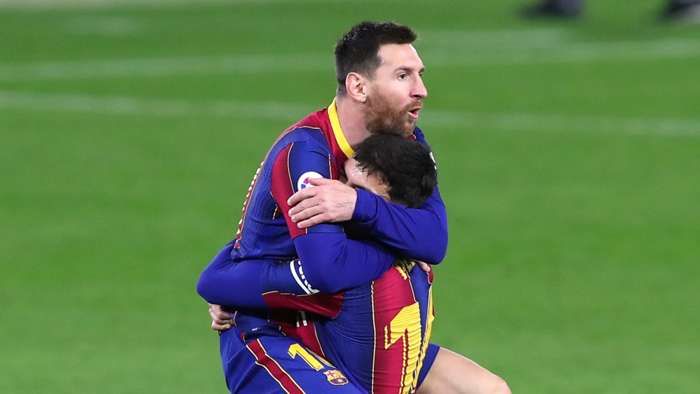 Barcelona travel to the Estadio Sanchez Pizjuan on Wednesday evening to face Sevilla in the first leg of their Copa Del Rey semi-final.

Sevilla, meanwhile, are also enjoying some excellent form with nine wins from their last 10 clashes andJulen Lopetegui's men sit just a point below the Catalans in La Liga

The two most recent meetings between these sides have ended in draws, with Barca's visit to Sevilla in July ending 0-0 and their meeting at Camp Nou in October producing a 1-1 stalemate.

Lionel Messi came off the bench to lead Barca to a comeback victory at the weekend and should start herealong with Frenkie De Jong, Pedri and Sergino Dest, although Gerard Pique, Ansu Fati and Philippe Coutinho remain sidelined with RonaldAraujo a doubt.

Sevilla are without Lucas Ocampos who picked up a serious injury against Getafe, while Marcos Acuna is also out and Jesus Navas unlikely to play anypart.

The last two matches between these sides have been tight affairs and Wednesday night's game could be another even counter particularly with it being a first leg.

Avoiding defeat will be the priority for both teams to give themselves the best chance of making it through to the final in the second leg at Camp Nou in two weeks.

Sevilla remain an extremely tough side to break down with the Andalusians keeping five consecutive clean sheets in all competitions, while in La Liga they boast the second-best home defensive record with only seven goals conceded in 10 games.

Barca, for their part, have the second-best away defensive record in the league, and with both two aiming to keep things tight in this first leg, opposing a high-scoring game is tempting at the Estadio Sanchez Pizjuan.