Sevilla were a 'team of giants' in Europa League final, says Diego Carlos 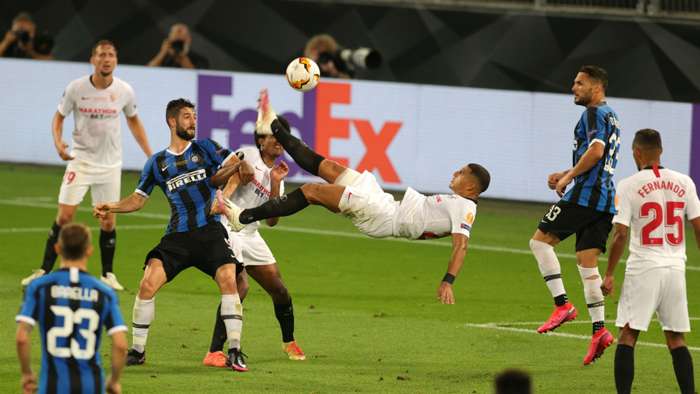 Sevilla proved they are a "team of giants" by coming from behind to triumph in the Europa League final against Inter on Friday, according to match-winner Diego Carlos.

Referee Danny Makkelie only showed the Brazilian a yellow card and, after Luuk de Jong equalised for Sevilla with a diving header, he was lucky not to give away another spot-kick for handball.

De Jong brilliantly nodded home a free-kick from Ever Banega in the 33rd minute, however, aDiego Godin header restored parity before half-time.

The second half was far less open but Diego Carlos had the final say on proceedings when his overhead kick found the back of the net off Romelu Lukaku in the 74th minute, ensuring Sevilla lifted the trophy for the sixth time in their history with a 3-2 win.

"I'm very happy. I had said to my family that I needed to score animportant goal and it happened. I'm very happy about everything," the Brazilian defender told Movistar post-match.

"This is a team of giant players, who fight until the last second. I dedicate it to my wife who is pregnant.

"It's a very important title for all of us. I'm thankful to Sevilla for everything they have done for me."

The showpiece event in Cologne marked Ever Banega's final outing for Sevilla, with the Argentine now set to join Saudi Arabian outfitAl Shabab.

The 32-year-old played an integral role for the Spanish club throughout the tournament, and produced another stellar display against Inter from the middle of the park.

Banega expressed his gratitude towards Sevilla boss Julen Lopetegui after the final whistle, telling reporters:"It's time to say goodbye as I deserve.