'She has the athleticism & the physical profile' - Is Leah Williamson's England future in midfield? 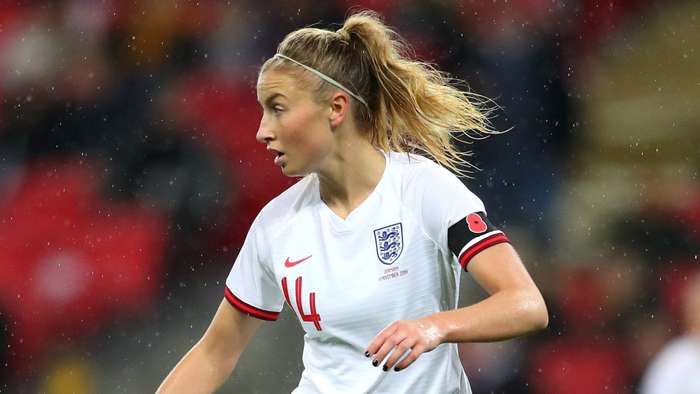 Given Leah Williamson’s performances for Arsenal combined withEngland’s defensive frailties, it seemsodd to some that the 23-year-old is nota regular starterfor her country.

She was outstanding for the Gunners in their title-winning campaign of 2018-19 and was named in the PFA Team of the Year for the first time last year, despite it being a tough campaign for Arsenal, who finished third.

In that same period of time, she hasmade just 17 appearances for England, with Phil Neville having long preferred the partnership of captain Steph Houghton and Chelsea’s Millie Bright atthe heart of his defence.

Williamson certainly has a long England career ahead of her, there isno doubt about that. It may just be that it isnot as a centre-back -for now, at least.

At the SheBelieves Cup back in March, where England played their only three competitive games of 2020,Williamson was deployedas a right-back against the United States, came on in central midfield against Japan and then started in the same position against Spain.

There was further evidence that Williamson’s immediate future at international level may lie somewhere else on Friday, as she played in a box-to-box midfield role in an in-house friendly for England - and was arguably the best player on the pitch.

“I think if we had games after that game against Spain, I think we would have continued with her in midfield,” Neville explained post-match.

“I thought she was fantastic tonight, she showed great qualities, and I think she's the type that takes to most challenges like a duck to water. I think she's got a great challenge playing in midfield.”

One of the reasons Williamson is able to shine so much in the middle of the park is because that iswhere started playing as a youngster. Both through the England youth set-up and when she came through at Arsenal, Williamson was a central midfielder.

It isa roleshe knows well, one she is confident in and one that her qualities suit. As is seen so often from her in the WSL every week, sheis a fantastic ball-playing centre-back, so it isnatural that she isable to move up the pitch and spray passes around.

“When you think about putting a 'defender' into midfield, you think they're just going to go into a holding type of midfield role,” Neville continued.

“But I brought her on against Japan at the SheBelieves and she was saying that her best position is in the No.8 role, the one that runs forward.”

That iswhere Williamson played on Friday. Linking up with long-time best friend Keira Walsh -the Manchester City star who is slowly becoming one of the best deep-lying midfielders in the world -she showedgreat energy, pressed with intensity andreally high up the pitch, too.

With Walsh behind her, Williamsonwas able to make those late runs into the box to try get on the end of a second ball,as all great No.8s do.

“She made some fantastic runs down that right channel,” Neville said of her performance.

“She's got the athleticism, she’s got the physical profile to play as a No.8, and she's got the speed to recover and to get back into position straightaway - similar to Jill Scott, she's got a similar profile in that respect.”

Walsh added: “I thought she was brilliant in there, playing on the front foot, playing forward, and she showed that she’s capable of playing in there alongside anyone.”

The understanding with Walsh was especially noteworthy, as both will likely be crucial players for England for the next decade.

This was just a training match, and there will be no chance to experiment with Williamson in midfield against real opposition,after England's game with Germany on Tuesday was cancelled due to a positive Covid-19 test among the Lionesses' backroom staff.

But it is something that will certainly give Neville - and his successor, Sarina Wiegman -food for thought, as the centre-back areas are stacked with young talent.

Bright and Abbie McManus are both still only 27 years old, while Millie Turner and Grace Fisk, the uncapped centre-back duo who have both impressed in the last two England camps, are 24and 22respectively.

In midfield though, particularly in that No.8 role, there is notthe same young talent currently in the senior picture for England.

“Ultimately, you want her on the ball as well because of her composure,” Neville said. “We see a good future for her, not only in midfield but at centre back as well.”