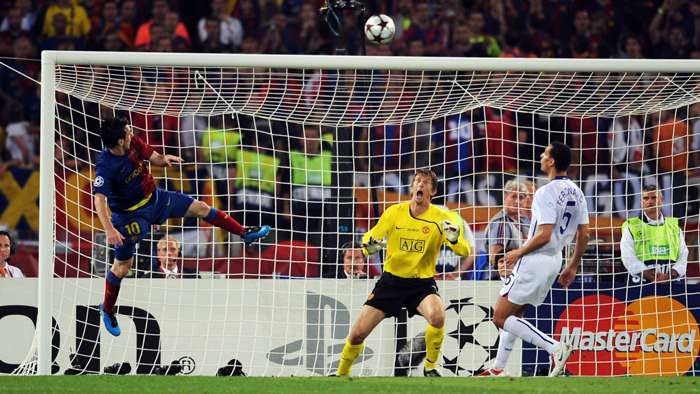 The Red Devils beat Barca in the last four to earn a place in the 2008 showpiece, with a Paul Scholes goal enough to send them through 1-0 on aggregate.

United set up to frustrate the Spanish giants and look for openings on the break, which proved to be an effective strategy as they minimised the threat of talismanic trio Lionel Messi, Samuel Eto'o and Andres Iniesta over the two legs.

However, the two teams met again in the final a year later, and Ferguson altered his system in an attempt to honour the club's time-honoured philosophy of free-flowing attacking football.

Goals from Eto'o and Messi gave Barca a 2-0 victory in Rome, a result which ultimately flattered the Red Devils given Barca's dominance on the night.

The Blaugrana repeated the trick two years later at Wembley, as Pedro, Messi and David Villa found the net to cancel out a fine Rooney strike in another one-sided game.

Speaking ahead of Real Madrid's trip to Etihad Stadium on Friday, where they will be aiming to overturn a 2-1 deficit in the second leg of their round of 16 tie against Manchester City, the United legend admitted that Ferguson took the "wrong approach" in both finals against Barca.

"It's always hard for a club like Real to go into a game saying 'we'll surrender the ball'. It is the same for United," Rooney told The Sunday Times. "But we lost two Champions League finals going toe-to-toe with Guardiola's Barcelona, by trying to press high and get round them, which was suicidal.

"I remember Alex Ferguson saying 'we're Man United and we're going to attack, it's in the culture of this football club' and thinking 'I'm not too sure about this'.

"I think all the players knew, deep down, it was the wrong approach, that we were abandoning the way that had brought us success in that 2008 semi-final,and sure enough both times we got outplayed."

The Red Devils' all-time record scorer went on to reference Liverpool's 2-0 win against Tottenham in last year's final as proof that pragmatism often reaps rewards on the biggest stages.