'So far we have no offer' - No bids for Chelsea-linked Havertz, claims Leverkusen director 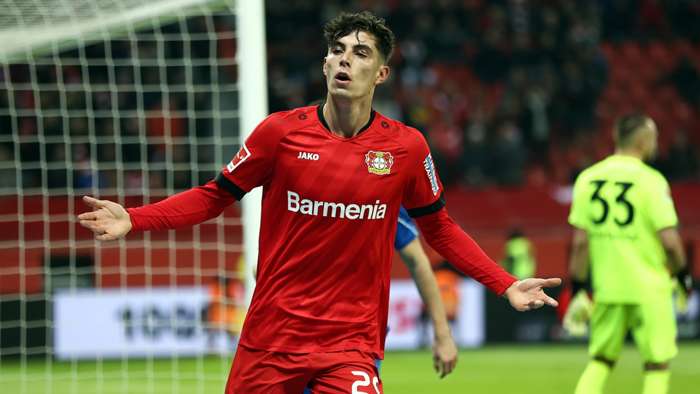 Bayer Leverkusen director Simon Rolfes says that the club has not received an offer for Kai Havertz amid widespread reports that Chelsea are chasing the German star.

Havertz's performances this season helped capture the attention of Frank Lampard's side, with the 21-year-old providing12 goals in 30 games to guide Bayer to fifth place in theBundesliga.

Chelsea have had discussions with Havertz's representatives and will next look to agree on a fee after establishing that he wants to move to Stamford Bridge.

The midfielder had been tipped to make an early exit this summer, departing Bayer Leverkusen before the club's return to the Europa League, much like how Werner's deal was pushed through ahead of RB Leipzig's Champions League tie against Atletico Madrid.

However, director Rudi Voller said that there is no chance of the club selling Havertz before Leverkusen's European run is complete, saying that the midfielder's participation is "set in stone".

Rolfes echoed a similar sentiment, saying that the club has not received an official offer just yet and, even if there was one, Leverkusen would expect Havertz to finish the season.

"So far we have no offer," Rolfes said in a press conference. "We know about the interest of clubs, but there is no official offer.

"We have said several times that we will end the season with our entire squad. And that includes Kai. That goes without saying for us."

He added: "He is focused. Kai is relaxed with the speculations, is focused, in a good mood.

“He makes a good impression. The holiday did him good like the other players.”

Chelsea defender Antonio Rudiger, also a German international, hailed Havertz as a "great talent", having previously been dubbed Agent Rudiger for his role in the recruitment of Werner earlier this year.

The Blues are set to face Arsenal in the FA Cup final this weekend before continuing their Champions League campaign against Bayern Munich.