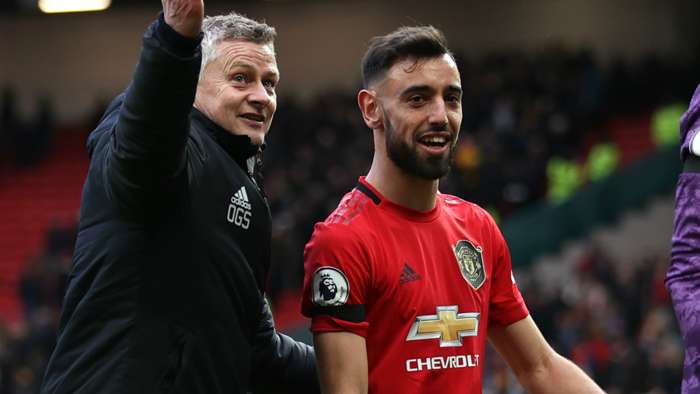 Manchester United talisman Bruno Fernandes has revealed that Ole Gunnar Solskjaer has told him not to make so many runs during matches, but he says that he "can't control" his urge to get forward.

The 25-year-old contributed 12 goals and eight assists to the Red Devils' cause in all competitions, as Solskjaer's men also reached the semi-finals of both the FA Cup and EuropaLeague.

Fernandes has injected a much-needed spark into a side previously short on creativity, while also taking on leadership responsibilities and helping to raise the performance levels of his new team-mates.

In addition to his brilliance in possession, the Portuguese has proven to be quite the workhorse off the ball, and is often seen bursting into the penalty area when the chance to open up the opposition defence presents itself.

Solskjaer has instructed Fernandes to temper his enthusiasmslightly in order to reserve energy, but the ex-Sporting starlet claims that his "instinct" takes over when he steps out onto the pitch.

Fernandes told United's official website: “I talk already with the manager and he says to me a lot of times ‘sometimes you do so many runs and some runs aren’t for you – you need to shout someone else to run, because after you are tired and, when you take the ball, you will not be fresh.’

“But it’s instinct, it’s part of my game. I can’t control this. I’m like this and I want to help the team every time.

“In the game, you don’t think, you just run. For me, that’s enough.

Fernandes added on his role as a creator in the middle of the park:“It’s important to be in the goals, whether it’s doing assists or scoring, so, for me, it’s the same.

“Of course, I enjoy assisting my team-mates because playing no.10 is the position you have to serve your team-mates.

“Sometimes, I look too much for them when I have the chance to shoot but I try always to serve them, because, normally, the strikers are there to score. For their confidence, scoring is important.

“A No.10 doesn’t need to score a lot to be confident. For them, it’s important.

“Since I arrived in Manchester, I try to serve more than score – but I have more goals than assists. That’s true!”