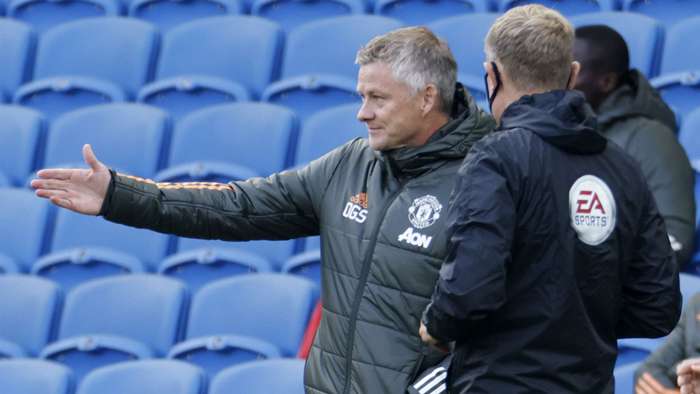 Ole Gunnar Solskjaer was relieved to avoid any Jose Mourinho-inspired measuring of the goalposts as Manchester United saw Brighton hit the woodwork five times in a thrilling contest at the Amex Stadium.

There were no such issues at the Amex on Saturday, but the frame of the goals on the south coast did see plenty of action.

Five efforts were fired through them, including a 100th-minute penalty from Bruno Fernandes, while Leandro Trossard rattled the woodwork on three occasions by himself.

United were able to snatch maximum points from the most dramatic of contests, having seen a late spot-kick awarded after the final whistle had initially been blown, and are now up and running in 2020-21.

Solskjaer admits that his side can considerthemselves fortunate to have emerged victorious, but was pleased to see Lady Luck offer the Red Devils a helping hand on a testing afternoon.

He told BT Sport afterwards: “We got away with one. Maybe one point we deserved, we didn't deserve more. But the character deserved more.

“Last season we had too many draws, so that is a big plus for us. You have to be happy Jose is not here to measure the goalposts!

“They are a difficult team to play against. We don't have the legs and sharpness but we will get there. We have plenty of work ahead.”

While Solskjaer was able to put a positive spin on the final result for United, his opposite number was left to reflect on a “sore one” for Brighton that will take some getting over.

Seagulls boss Graham Potter told BBC Sport: “The performance level was amazing from us, I'm so proud of the players. It's a sore one, to say the least. Sometimes life isn't fair and it feels like that at the moment.

“All the little things have gone against us but we were really good for 90 minutes and we have to take that forwards. We have developed as a group, as a team, and we will take that setback as positively as we can.