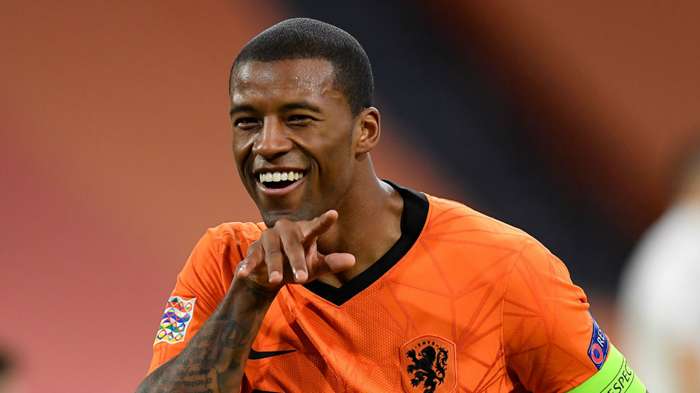 Georginio Wijnaldum acknowledged there were points where the Netherlands did not look great in the victory against Poland.

The Netherlands came from behind to win 2-1 in Chorzow, but that was not enough to secure a return to the Nations League finals as Italy's 2-0 victory against Bosnia-Herzegovina ensuredthey finished top of Group A1.

Kamil Jozwiak put Poland in front inside five minutes with an impressive solo goal, but Wijnaldum won a penalty that Memphis Depay converted in the 77th minute and then scored a deflected header to give Oranje a second win in six games under Ronald de Boer.

Poland were a potent threat on the break and match-winner Wijnaldum admitted they made the Netherlands look bad atpoints, saying the Dutch must improve if they are to do well at Euro 2020.

"I think this was one of our best matches. At the start we weren't sharp and they were able to score early, but otherwise it was good," Wijnaldum told NOS.

"Only in transition can we do better. Sometimes we just don't look good. It's hard to train on it. We don't have much time to practise that sort of thing together between games.

"We have to make these steps as soon as possible if we want to do well at the European Championship. We did what we had to do."

Poland's Bayern Munich striker Robert Lewandowski started the match despite being a doubt due to a muscular injury.He assisted Jozwiak's goal and released Przemyslaw Placheta for a shot that hit the post before going off at half-time.

De Boer was disappointed his players did not heed his warning to focus from the off at Silesian Stadium but he was not too disappointed with the performance.

"I saw more positives than negatives," De Boer said. "I warned the team beforehand that because of all that hassle with Robert Lewandowski over the past few days, I expected Poland would want to show something.

"You have to be sharp from the first second, but it seemed as though we were not. Defensively, it should definitely be better, we are going to work on that. You cannot start like that.

"After 1-0 we picked it up very well and created one chance after another. Then we showed what we can do. We have to work on everything, but I leave with a good feeling.