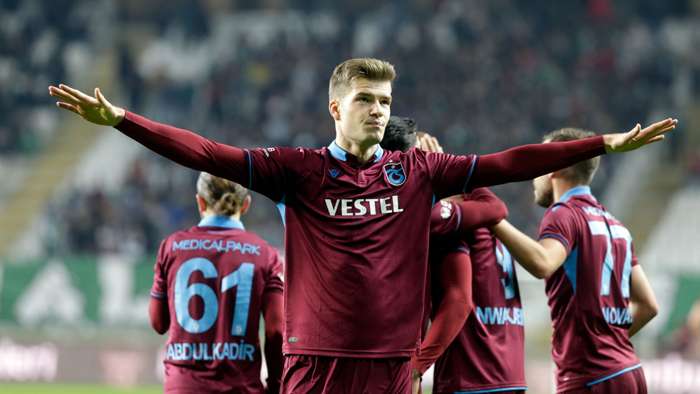 The president of Trabzonspor has admitted that there is nothing he can do to keep Alexander Sorloth at the club amid interest from Tottenham and RB Leipzig.

Sorloth, 24, joined the Super Lig club from Crystal Palace on a two-year loan in 2019 after failing to break through at Selhurst Park.

The forward made an instant impact in Turkey, smashing 24 goals in 34 league games to take the top-scorer crown and finishing the 2019-20 season with a total haul of 33 strikes in all competitions.

That form has not gone unnoticed with RB Leipzig admirers of the Norway international's talents.Trabzonspor president Ahmet Agaoglu has now confirmed thatTottenham have also joined the race.

And as negotiations continue with both Palace and Trabzonspor, who will need to accept a separate offer to cancel the second year of Sorloth's loan, Agaoglurecognises the forward will most likely not remain at the club for the 2020-21 campaign.

"Sorloth wants to go," the Trabzonspor president explained in an interview withFanatik.

"But there is no way that we will agree immediately for every player who wants to leave. We are meeting with Leipzig and Tottenham, ourselves and Crystal Palace.

"We are both entitled to this transfer, we will act in Trabzonspor's best interests. This team has something people still don't understand: It grows, sells, develops and sells. It does not sink money into the players it buys."

Agaoglu's words come after Sorloth failed to report back for club duty following the most recent international window, an act which earned the striker a fine - and prompted Trabzonspor to reveal the existence of offers for his services.

"We have received an offer from RB Leipzig for our player Alexander Sorloth and our board is considering this offer with the best interests of our club in mind,” a statement made on Saturday read.

"While we were in the process of negotiations for all parties to get together, which requires the early termination of the loan contract, Alexander Sorloth had gone to Norway to join his national team.