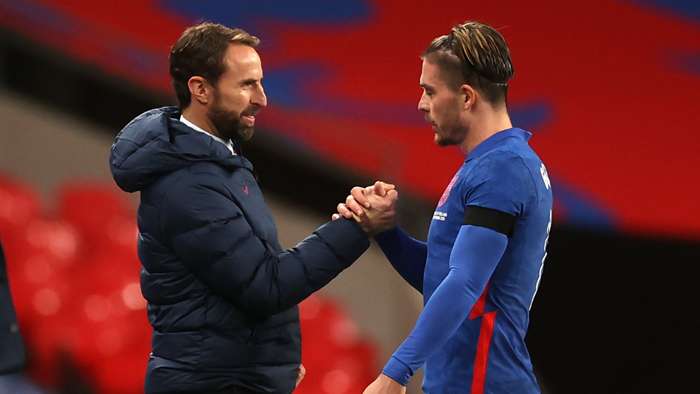 England manager Gareth Southgate believes his squad will peak in 'the next three to five years'after the Three Lions' youngsters starred against Iceland.

Declan Rice opened his international account, with Mason Mount doubling England's tally before Phil Foden – who had created the opener – scored his first goals for his country to complete the rout.

The only players aged 30 or olderin England's starting XI were Kieran Trippier and Kyle Walker, Southgate startingfour players – Foden, Mount, Rice and Bukayo Saka – aged 21 or younger;the first time the Three Lions have done so in a competitive match since November 1959.

His faith was repaid, with all of them turning in impressive displays as England dominated from start to finish, controlling 78.3 per cent of the possession, while Jack Grealish was again in superb form from a free role on the left flank.

Grealish, 25, won six fouls, meaning he has drawn 21 in total since his debut for England in September, more than any other player in that time.

Rice, meanwhile, is the first West Ham player to score for England sinceMatthew Upson against Germany in the 2010 World Cup, while the midfielder is also the second-youngest Hammer – after Joe Cole – to net for the Three Lions.

Two of Mount's three goals this season have come for his country, and with Foden's late double, three players aged 21 or under netted in the same match for England for the first time sinceFebruary 1883 againstIreland, whenWilliam Cobbold, Oliver Whateley and Frank Pawson found the net.

With Southgate's 3-4-3 system finally clicking against Iceland, the debate will now turn to whether it is the formation the England manager should use heading into the Euros.

Jadon Sancho came on from the bench, as did Tammy Abraham, while in-form Dominic Calvert-Lewin was an unused substitute.

Raheem Sterling and Marcus Rashford were missing altogether, and with Mount, Grealish and Foden all looking sharp, Southgate has a plethora of attacking options to choose from, without factoring in the likes of Trent Alexander-Arnoldand James Maddison.

However, it is a headache he is happy to deal with as he predicted when he expects his young squad to reach their peak.

Southgate told Sky Sports: "I think over the last few days their talent has been outstanding. It was a very difficult game, all the players were hearing messages that this is meaningless and there was nothing to play for but they did play for it, there were big opportunities for young players but also for some older players.

"We're still trying to build and improve all the time. There was lovely football and it was good to watch and it was good for the young ones to get the goals – very special for them.

"The squad that we've had over the last three months is going to peak in the next three to five years and they'll get a lot more club experience and international experience. We'll invest the time in them. There are some very good senior professionals as well.