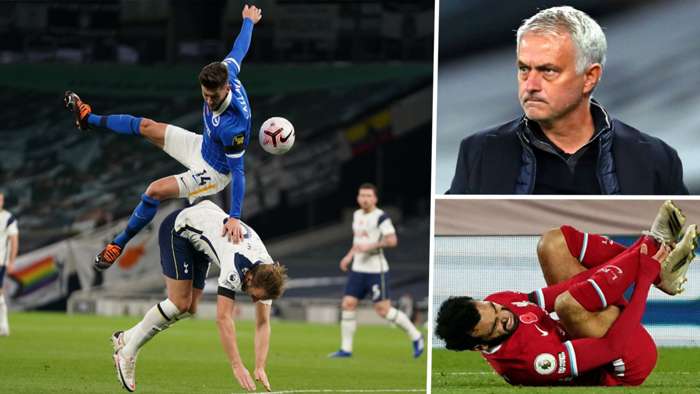 Jose Mourinho took issue with the suggestion Harry Kane was "clever" in winning penalties as the Tottenham boss encouraged the media to look at similar incidents involving rival top clubs.

Kane appeared to step into a challenge with Brighton and Hove Albion midfielder Adam Lallana, who was already in the air contesting a header.

Rather than award a foul against the Tottenham man, though, the referee pointed to the spot to the bemusement of Lallana after a VAR check confirmed the incident occurred inside the penalty area.

But Mourinho, speaking ahead of a Europa League trip to Ludogorets where he promised to go "full power", believed it was a genuine foul and defended his player.

"I think you are confused," Mourinho fired back when asked about the decision.

"He was in position to control the ball and Lallana came in a reckless action and committed the foul. It was a foul. What are the media speaking about? It's a foul.

"Direct free-kick or penalty, that's for the VAR to decide. It's inside the box.

"It's not being clever. Harry Kane is there to score goals. Lallana was reckless, he made a mistake. What are you speaking about?

"You have to speak about something that happened that could have a direct impact on the result of the game, which was their goal.

"Speak about Liverpool, Man United, these penalties where you see the 'clever' guy on the floor. Don't speak about Harry Kane."

It was not the first time Mourinho has railed against the media in recent days, revealing after Gareth Bale's first goal back at Tottenham - also against Brighton - he would be studying the response in Spain, where the winger was criticised as a Real Madrid player.

"I just talk about the Spanish media, the media that used to not be very nice with Gareth," he said on Wednesday.