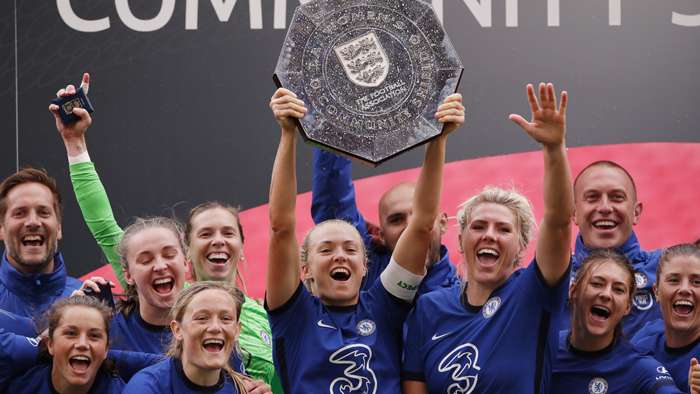 For most teams, when your star striker misses a glut of clear-cut chances, it isprobably not going to be your day.

The Blues ran out 2-0 winners against Manchester City in the Women’s Community Shield witha performance that highlighted rust at times as Australiasuperstar Sam Kerr was guilty of missing many opportunities.

It also showcased, though, just how much depth the reining English champions now possess.

After adding Kerr in January, Chelsea signed Bayern Munich captain Melanie Leupolz, Canadian sensation Jessie Fleming and Liverpool youngster Niamh Charles over the summer, with rumours circulatingthat Wolfsburg’s Pernille Harder - one of the best players in the world right now -will be next.

Fran Kirby’s return to the side from illness after a year out fits the old cliché of ‘like a new signing’ as well, and the England internationalreminded everybody just how good she is under the arch.

But for all the talk of those players, Saturday was a reminder of what Chelsea already have, too.

It was centre-back Millie Bright, who signed from Doncaster five years ago now, who smashed in the game’s opening goal from 35 yards – the goal that ultimately knocked the stuffing out of City, especially when followed by Jill Scott’s sending off.

Erin Cuthbert, who arrived from Glasgow City back in 2017, then came off the bench to wrap things up in stoppage time.

Ji So-yun, meanwhile, was the best player on the pitch, with the South Koreastar showing her true class as always in midfield, as she has done in every game since she joined this club all the way back in 2014.

All three were key members of the Chelsea team that beat the 2018-19 WSL champions, Arsenal, home and away last season, as well as securing a win and a draw against Man City.

It isquite terrifying to think that they now look ready to move onto another level completely.

"I think you have to remember that I've been here nine years. This hasn't just happened. I haven't just assembled the team overnight," Hayes said.

"This has taken some time to build the quality. I am so lucky to be given the chance to manage at Chelsea and be given the trust by the club to build players that have stuck with me in this process, that have signed contracts to remain at the club when lots of them could play anywhere in the world.

"I think it's a real testament to the football club and to them, and I think for the likes of Millie and Erin, they know what we're doing here and they are two wonderful team players.

"That's what our environment is all about. It's about contributing to the team."

Given that all the talk coming into this game was about City and their new signings – Chloe Kelly joining from Everton, while World Cup winners Rose Lavelle and Sam Mewis have come over from the United States – it was a moment where Chelsea reminded everyone just why they are the reigning WSL champions.

Going forward, Kerr will only get sharper. Her finishing was notthere against City, but her movement off the ball was world-class, with Hayes adding: "I'm not disappointed in anything with her game today.

"I think Sam ran well for the team today. She caused problems, she created chances, I think if you've got a striker that's not creating chances, that's a concern."

Furthermore, we have noteven seen anything of those new signings yet – with only the impressive Leupolz among the starters at Wembley.