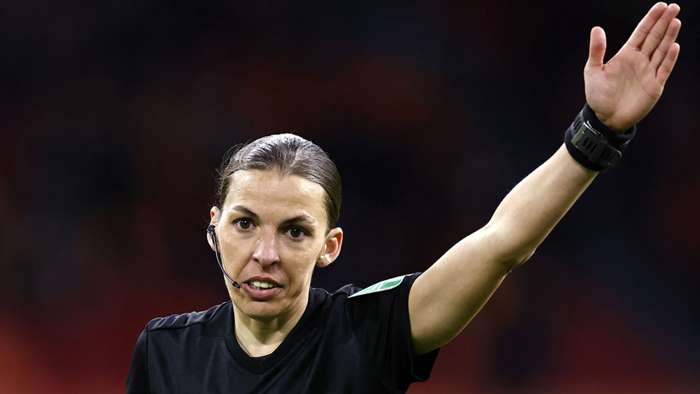 Stephanie Frappart wrote herself another piece of history when becoming the first female to referee a men’s World Cup qualifier.

Frappart is hugely respected in the game, and earlier this season she became the first female to take charge of a Champions League match, when Juventus faced Dynamo Kiev in December.

She is alsothe first female referee to have overseen a major mens European final when she took charge of the UEFA Super Cup clash between Liverpool and Chelsea in September, 2019, while she has refereed in Ligue 1 in her native France.

Having consistently impressed in the women’s game, Frappartbroke further new groundon Saturday following her Champions League appearance as she ran the rule overthe World Cup qualifier between Netherlands and Latvia.

While Frappart is the high-profile female official - having been the referee for the 2019 Fifa Women’s World Cup final between USA and Netherlands - she is not the only one whohas impressed, and Kateryna Monzul will follow herlead when she takes charge of the World Cup qualifier between Austria and Faroe Islands in Vienna on Sunday.

Pierluigi Collina is arguably the most famous referee to blow a whistleand, as the current chairman of FIFA’s Referees Committee, he oversees appointments.

The Italian feels Frappart and Monzul are fully deserving of taking charge of the World Cup qualifiers.

“Although they already had some matches in important men’s competitions under their belts, officiating a FIFA World Cup qualifier for the first time is special and is something to be very proud of,” he said. “They have worked very hard in recent years and these appointments are recognition for the good job that they have done.”