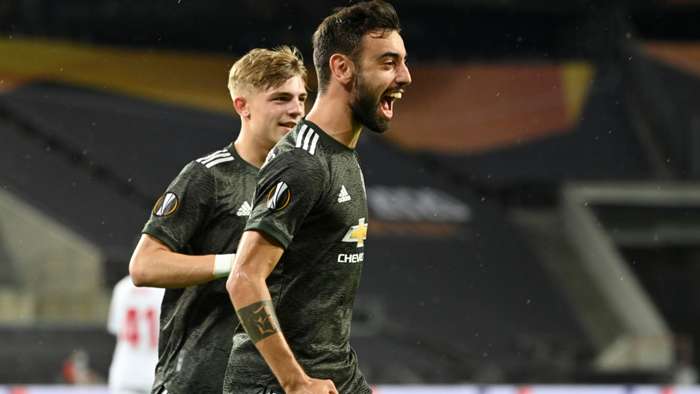 Andrea Stramaccioni has revealed he pressured Bruno Fernandes to get married when the pair worked together at Udinese.

Fernandesmarried his high school sweetheart, Ana Pinho, in December 2015, after Stramaccioni's departure, but the 44-year-old feels he played a role in persuading the Manchester United star to pop the question.

"I was pushing him a lot to get married," he said toSky Sports.

"'You love this girl, you need to marry her' and when he did marry her he called me to say: 'Coach I did it.' It was funny, it was a way to joke with him."

Stramaccioni says he was impressed by the Portugal star's attitude and work rate, but admits he was surprised to see him become an immediate fans' favourite at Old Trafford following his January signing from Sporting.

"Bruno was one of the talented young players of Udinese. He was playing but not established. He was learning a lot and growing up and was very shy," he said.

"He's a good person and a hard worker. His approach was always positive, even in a bad situation. He never came with the nose up and his team-mates appreciated that."

He continued: "I didn't expect such a quick impact at Manchester United, but they are different from the past. There are many young players and he was clever and earned his leadership.

"He was such a hard worker. Every training I said you have to come back this afternoon and do extra and he always did.

"He did two or three extra training sessions per week and worked hard on his technical side, and his strength in the gym. He is so strong mentality. He never said: 'No, why do I have to come back'.

"Look at videos of him six years ago and look at him now. It's all from his work and his mentality. I am very happy for him."

Stramaccioni is also familiar with Fernandes' unorthodox penalty-taking style, which has proved effective since he joined the Old Trafford side.

"He's very cold. He has a killer instinct. I don't know if he did it in Portugal, but in Udinese he did it. He wasn't our penalty taker but he did it in training."

Stramaccioni's senior coaching career began in 2012 when he replaced Claudio Ranieri at Inter at the age of 36.

He has since had spells in charge of Udinese, Panathinaikos, Sparta Prague and Iranian side Esteghlal, but has never lasted longer than a year in any of his jobs.

The former defender left the Tehran club in January and is ready to get back in the game.

"Italy is my priority in Serie A. For me I will wait for the right situation," he said.

"I learned in my 12 years that it's better to wait for the right situation and the right plan. Maybe it will be in the UK.

"I was close to Sheffield Wednesday four or five years ago. I was in touch with Aston Villa two years ago and I was very close to Watford because you know it's the same owner as Udinese.