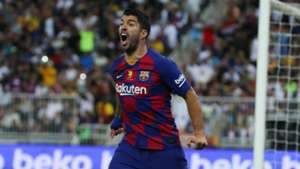 Luis Suarez hopes he can go past Laszlo Kubala on the list of Barcelona's all-time top scorers to prove what an impact he has made at Camp Nou.

Suarez has been sidelined since undergoing knee surgery in January but is in line to feature again when the season resumes amid the coronavirus pandemic.

The former Liverpool forward will take to the field just three goals behind third-placed Kubala in Barca's record books.

Suarez has the opportunity to boost his tally of 191 Blaugrana goals, narrowly short of the great Hungarian's 194 haul, between now and the end of the campaign.

However with Barcelona locked in a tense title tussle with Real Madrid and still engaged in the Champions League, Suarez - while keen to overtake Kubala - is focused on securing silverware.

"I always say that records or landmarks come by themselves," he told Barca TV. "You just need to focus on helping the team as best you can. The chance to move past a legend like Kubala is very welcome. It means you left your mark at a great club like Barca."

Only clear leader Lionel Messi and second-placed Cesar, a star of the 1940s and 1950s, have scored more goals for Barcelona than Kubala.

Suarez anticipates challenges with the unorthodox end to the season, which follows a three-month break caused by the health crisis, adding: "I think it's a mix of everything. I think we are not used to playing in such heat in the middle of summer, but we are acclimatising ourselves to playing matches in the heat.

"As for the fans, it will be unusual to play in a stadium without a crowd, but we will adapt. I have done it before, so we will just try to focus on the football and doing well and winning matches in the league, which we all want so much to win."

Barcelona will be restarting sat two points clear of Clasico rivals Real Madrid at the top of the Liga standings. They have 11 league games left, while Champions League glory also remains up for grabs having reached the last-16 stage of that competition.