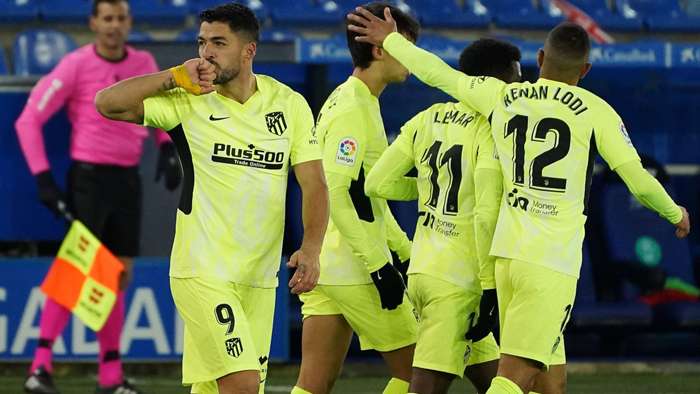 Luis Suarez continues to endear himself to his new fans at Atletico Madrid as a last-gasp winner against Alaves saw the striker set a recordfor the best start at the club in the 21st century.

Atletico swooped to bring Suarez to the Wanda Metropolitano, and he has wasted no time in making his mark at Barca's La Liga rivals.

He was on target in the 90th minute on Sunday to lead Diego Simeone's men to a 2-1 win over Alaves, after a Felipe own goal minutes earlier had chalked off the advantage established in the first half by Marcos Llorente.

It was his ninth goal in the 2020-21 Primera Division, a tally that leaves him tied with Gerard Moreno of Villarreal and Celta's Iago Aspas as the most prolific scorers in the current campaign.

And with two further assists, it is clear that he has taken to life in the Spanish capital like a duck to water.

Combined, those 11 goal contributions (accumulated in as many games) see him overtake Radamel Falcao's mark for the best start to an Atletico career this century.

The Colombian racked up nine goals and one assist in his first 11 games after moving to the club in 2011 from Porto.

Suarez initially shared his attacking duties with Diego Costa at Atletico, but the veteran's exit on a free transfer means that the onus is now on him to keep the club secure at the top of the table.

With 12 wins in their opening 15 games, 29 goals scored and a miserly six conceded, hopes are high around the red and white half of Madrid that this will be the year that the Liga title returns after an absence of seven years.

Simeone's men currently sit two points ahead of Real Madrid having played two fewer games, with Barcelona trailing by a huge margin of 13 back in sixth ahead of their clash on Sunday with Huesca.