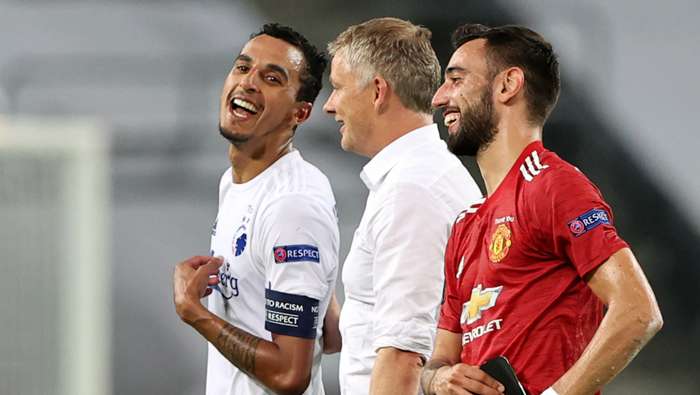 Despite his side's disappointment, United supporter Zeca took the opportunity to praise the coach for the progress the team have made since he took over, while Solskjaer turned it into an embarrassing moment for his star player Fernandes.

"Thank you very much for everything you're doing with Manchester United," Zeca said to Solskjaerwhen he came up to shake his hand after the final whistle.

"We're trying to get it back. He's helping. This boy is helping," the United boss replied, gesturing towards Fernandes as the midfielder walked alongside them smiling.

"He's a little bit angry that I was going to take him off. He was giving you the ball all the time."

Zeca revealed his love for the Old Trafford side in the build-up to the encounter in Germany, reserving particular praise for Portuguese star Fernandes, who went on to make the difference on Monday.

"United have been my favourite team since I was little. My dream was to play at Old Trafford, so it's a bit of a shame that we play in Germany," he told Danish newspaper Bold earlier last week.

"I loveBruno Fernandes. He is really good, and one player cannot shut him down, so we must work well together as a team to succeed."

United will meet the winner of Tuesday's clash between Sevilla and Wolves in the final four of the Europa League, while Inter will face either Shakhtar Donetsk or Basel in the other semi-final.