The Corona Libertadores! Tevez in the eye of the storm as Boca Juniors resume bid for glory 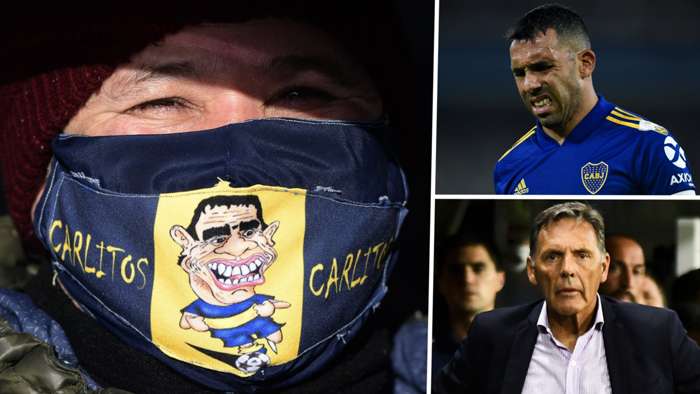 To paraphrase the great Oscar Wilde: to lose one player to coronavirus may be regarded as a misfortune; to lose 22 looks like carelessness.

Even before this mini-epidemic, the Argentine giants, along with all the nation's participating teams, were at a huge disadvantage going into the continental competition.

The upshot is that what may prove Carlos Tevez's final opportunity to regain the title he desires so much, now appears a near-impossible mission for his side.

Tevez was one of the few Boca stars to avoid infection, having apparently already contracted Covid-19 at some point prior to their return to training in August.

The forward and his antibodies did the rounds at the team's base, while coach Miguel Angel Russo was forced into confinement due to his age (64) and medical history placing him in the at-risk population. Only this week, some 72 hours before returning to action, was Russo cleared to take practice again, wearing two masks as an extra precaution.

However, most of the players that tested positive have been cleared to play in Thursday's clash with Libertad on the grounds that while the virus remains in their system, they are unlikely to still be infectious – a decision that has disgusted Boca's opponents, who threatened legal action against CONMEBOL.

Livid over this circumvention of the rules, the Paraguayans went on to invite Boca to carry out further testing upon landing in the country, also taking aim at the local Health Ministry for allowing the affected players to enter in the first place – before, late on Wednesday, revealing their own positive case in defender Diego Viera.

Russo will not risk the flight to Asuncion for Thursday's game, leaving assistant Leandro Somoza in charge. Winger Sebastian Villa is also ruled out, having been informed by Boca that he will not play any part in the team until a verdict is passed on charges of domestic violence filed by the Colombian's ex-girlfriend.

With no coach, the majority of first-teamers having spent the last fortnight in isolation and their last game coming six months ago, Boca start in the unfamiliar position of rank outsiders as they resume their campaign in Group H.

It was not supposed to be this way for Tevez, who, at 36, may not have another chance to win the trophy he last lifted back in 2003 and which has become an obsession since he left Juventus for his Bombonera homecoming five years ago.

Covid-19 has not been the forward's sole problem over this seemingly eternal, inactive South American winter either.

Tevez found himself at the centre of a contractual dispute just weeks after claiming March's Superliga title, when a routine disagreement with directors over duration somehow expanded to a public discussion over his value as a player.

Two members of vice-president Juan Roman Riquelme's sporting directorate, Jorge Bermudez and Raul Cascini, stated in successive television interviews that Tevez was an “ex-player” prior to Roman's triumphant return to the club in December's presidential elections (lest we forget, the two Boca idols sustained a rocky relationship prior to making peace at the start of the year).

Unnecessary provocations aside, he did eventually sign an extension until June 2021, albeit with the option to rescind as early as December if he feels “without energy”.

If that drama were not enough, Tevez was subsequently accused of breaking Argentina's strict lockdown rules by hosting a kickaround in his sumptuous property in rural Maipu, which involved a district councillor and his son.

The player posed for a photo but later claimed, per a Maipu District press release, that those present on his grounds broke in without his permission.

No matter what the circumstances of Boca's competitive return, one gets the feeling that being back in any context will come as a huge relief to Carlitos, as it allows him to once again focus on the field and the Copa he so desires.

“I am going to continue in Boca... I want another chance to win the Libertadores,” he vowed back in June to Radio La Red prior to signing his new deal, under the terms of which his entire salary and bonuses will be donated to charitable causes.

Thursday's match will be key in that sense for the Xeneize, who currently lie in second in Group H after two games, two points behind leaders and next rivals Libertad.

Boca have been one of the hardest-hit clubs in South America going into the resumed Copa, but plenty of their rivals have suffered their own hardships.

Just ask Martin Brignani, coach of Venezuela's Estudiantes Merida. The Argentine returned to his native Mar del Plata in May on a special repatriation flight and has been unable to secure transport back to his place of work, leaving assistant Jose Torrealba to lead the team in Wednesday's Libertadores meeting with Alianza Lima.

Brignani, however, promised that he would coach via WhatsApp if necessary while watching on TV thousands of miles away, telling Olé: “If I don't like something in the match, I will tell them to make changes.”

At least he will be able to make Estudiantes' next match on Tuesday against Nacional – as he plans to hitch a lift in the charter jet ferrying the Uruguayan opponents to Venezuela.

Preparations for Racing Club's clash against Nacional, meanwhile, were complicated by the entire refereeing team testing positive, leaving the fourth official from Defensa y Justicia vs Delfin to take charge and an Argentine official, Mariana de Almeida, to run the line for her compatriots in Avellaneda.

Meanwhile, an entire team, Peru's Binacional, were forced to relocate due to the elevated number of cases reported inJuliaca, a move that sees them give up the advantage afforded by their hometown's3,800 metre altitude, which helped them engineer a huge upset over Sao Paulo prior to the outbreak.

Against such a backdrop and with players dropping out across the continent, this year's Copa, even by its normal chaotic standards, is set to prove one of the most disjointed and unpredictable in the tournament's 60-year history.

Harder hit than most going into their first match, Boca then have as good a chance as any team amid the confusion and disarray.