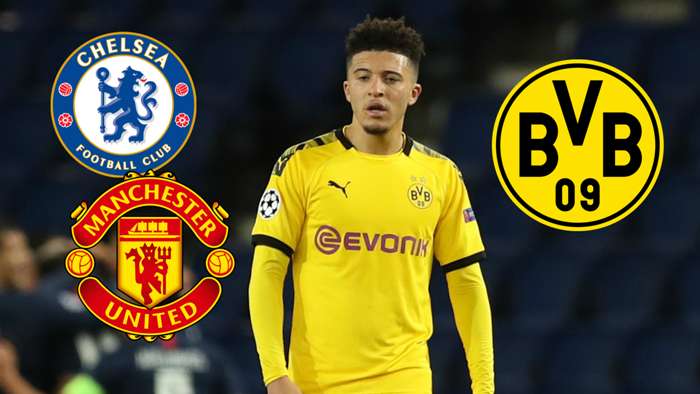 The winger felt his career would be better served by swapping the Etihad for Signal Iduna Park. He wasn't given any assurances that he would be a regular at City and saw a faster route to the first team at Dortmund.

Now, three years on, he would walk into the starting XI of almost any team in Europe, having established himself as one of the most exciting players in the game.

Consequently, he is now being linked with a lucrative summer transfer to either Manchester United or Chelsea.

Below, Goal investigates the pros and cons of the three options Sancho has in front of him...

The most discussed possible landing spot for Sancho in 2020 is Old Trafford, with Manchester United fans already planning their new-look starting XI for 2020-21 with the England international lining up alongside Paul Pogba, Bruno Fernandes, Anthony Martial and Marcus Rashford in an exciting, attacking team.

After starting out with Watford's academy, Sancho spent two years living in Manchester while he was on the books of United's local rivals. Given the way in which he forced his way out of City, the 20-year-old does not have residual loyalty to the blue side of Manchester, so pulling on the famous red shirt would not be an issue.

Moving back to Manchester would put a lot more attention on Sancho, who has often been in the tabloid spotlight in Germany. Joining the most popular club in the world would escalate this, especially as he would be expected to be the star for both club and country.

United are in a transitional phase under Ole Gunnar Solskjaer, who is attempting to restore the glory days he experienced as a player under legendary manager Sir Alex Ferguson.

Young attackers Daniel James and Mason Greenwood have shone at times for the Red Devils in 2019-20, but neither would keep Sancho out of the starting XI, where Marital and Rashford would likely partner him in the front three.

Solskjaer brought in Odion Ighalo on loan to give the side a traditional No.9, but the addition of Sancho would likely mean that Martial would be expected to fulfil the centre-forward role with limited resources left to spend big on a new striker.

The big stumbling block for the Red Devils is the asking price, with United only prepared to offer up to £85 million ($105m), which is far below Dortmund's asking price for their most-prized asset.

Unlike many teams who have been hit hard by the coronavirus pandemic, Chelsea have been able to spend money in this summer's transfer market.

The Blues have confirmed the signings of both Hakim Ziyech and Timo Werner, but are not yet finished their transfer dealings ahead of the 2020-21 season.

Sancho remains a name that is linked with Chelsea, who had him alongside Werner on their shortlist before deciding to activate the Germany forward's£47.5m ($59m) release clause.

The Blues were able to sign Werner from RB Leipzig for less than half the price they would have been expected to pay Dortmund for Sancho, leaving them in a good position to bring in their next target: Ben Chilwell from Leicester.

Frank Lampard's men could still re-enter the market later in the summer, but the priority is now securing a deal for Chilwell.

That makes a move for Sancho unlikely, but the 20-year-old could be the perfect addition to Chelsea's youngattack.

With Tammy Abraham serving as a more conventional centre-forward, Sancho could play on the opposite flank to Werner at Stamford Bridge and the pace and dribbling ability of both players would definitely cause problems for even the Premier League's best defences.

Like Solskjaer at Old Trafford, Lampard is looking to build Chelsea in his image and Sancho could be a player in the Arjen Robben or Damien Duff mould from when the current Blues boss marshalled the midfield and inspired the team to domestic and European success.

The pressure on Sancho at Chelsea would likely be less than at Manchester United, where fans expect them to compete for silverware every year.

Expectations were lowered during Lampard's first season at Stamford Bridge as the club was unable to sign players last year and is still in rebuild mode.

Moving to London would also put Sancho back closer to his original home, having been raised in Kennington and actually growing up as a Chelsea supporter before he joined Watford as a seven-year-old.

The simplest solution for Sancho this summer would be to stay at Dortmund. He is loved by the club's fans and is hugely popular with his team-mates.

But the simplest solution may not be the most desirable one for Sancho, who has no plans on extending his contract at Signal Iduna Park and would prefer a move to the Premier League.

Sancho's current deal runs until 2022, meaning that Dortmund would have to sell this summer or in January to maximise their profits. If they allow him to go into the last year of his contract next year, they could face losing him for nothing in two seasons' time.

Club CEO Hans-Joachim Watzke is confident that they can keep Sancho around for 2020-21 as they are determined not to let him leave for less than£100m ($123m).

Despite Dortmund expecting losses of €45m (£41m/$51m) due to the coronavirus pandemic, Watzke will not allow Sancho to be sold at a discount.

“If Jadon comes up to us and says he absolutely wants to leave – which has not been the case so far – and a club wants to pay what we want, then we will discuss it,” he told Sport1.

“I don't think a club will pay the sum. There is also no coronavirus discount on him. We have left the period where we had to sell players. I don't think there will be a summer transfer."

Sancho has excelled in the Bundesliga and staying there would allow him at least one full season alongside Erling Haaland, who has been just as sensational since arriving in January.

Both players have flourished in Lucien Favre's 3-4-3 system and remaining at the club for another season would allow Sancho to further progress before making a move in 2021.

By then, Chelsea and Manchester United would be further along in their own development, while another impressive season in the Bundesliga and the Champions League would likely convince Europe's other elite clubs to come calling.