The new Haaland? Why Salzburg's latest goal machine Daka is being linked with Spurs 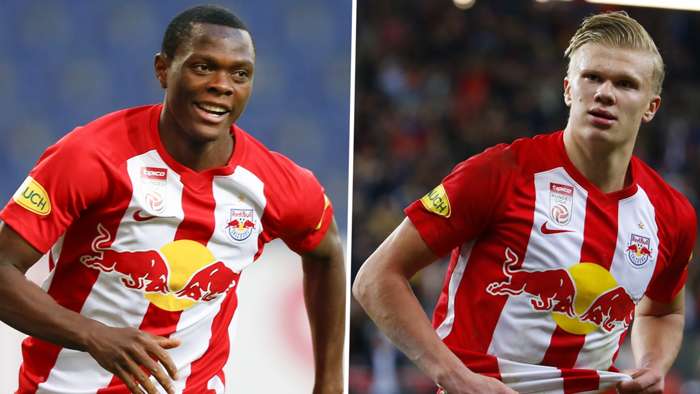 Red Bull Salzburg have become known for signing and developing young players from around the world– and then selling them on for a massive profit.

Salzburg's scouting system is huge and looks to find raw talent before other teams, giving them a chance in their youth and development sides before promoting them to the senior team.

Patson Daka is the latest player to make headlines at the Red Bull Arena, after joining from Zambian club Kafue Celtic in 2017 at the age of 18, and going from strength to strength ever since.

Kafue Celticclub directorLee Kawanu has monitored Daka's progress closely, after being responsible for moving him up the age ranks at youth level and throwing him into first-team football at just 15.

"I went to watch one of the reserveteam’s games and I saw this really skinny active boy on the pitch. He was shooting with his left and right, from outside the box and inside the box,"Kawanu told First Time Finish.

"Patson really caught my eye. So, immediately, I told the reserve coach to move him to the first team even though he was really small."

Daka's performances in attack also caught the eye of national team coaches, and he was brought into the Zambia Under-17 squad, where he scored seven times in seven appearances before making the step up to U20 level.

His scoring was not quite as prolificbut remained impressive nonetheless as he was playing against opponents two and three years older than him.

At club level, Celticdirector Kawanu recommended the forward to former Tottenham striker FredericKanoute, who had started a sports agency after his retirement.

Kanoute was impressed with what he saw from the teenage Daka and took him under his wing, helping his professional and personal development.

It was Kanoute who brought Daka to the attention of Salzburg, telling them and other clubs to watch his client in action for Zambia U20s at the COSAFA Cup in South Africa.

Salzburg promptly offered him a trial, which then turned into a six-month loan at their developmental side Liefering so they could see how Daka adjusted to the change in environment and intensity.

During his time at Liefering, he returned to play in the 2017 Africa U20 Cup of Nations, where he finished as top scorer and player of the tournament as Zambia lifted their first continental title at that age group.

Those achievements did not go unnoticed further afield either, as he was named CAF Young Player of the Year for 2017.

At Liefering, he did more than enough to secure a permanent deal with Salzburg, who used him in both the second division squad as well as their own underage team, with Daka scoring in the 2017 UEFA Youth League final as Salzburg stunned Benfica.

Daka's transition into the first team might appearsomewhat slow, given he moved to Europe in January 2017, but that's because he started so young.

Daka is still only 21 but has already become the new talismanic frontman for Jesse Marsch's side, filling the considerable void left behind by Haaland, who left for Borussia Dortmund last winter.

He finished the 2019-20 Austrian Bundesliga season with 24 goals in 31 appearances as Salzburg won their seventh league title in a row.

This season, Daka has picked up where he left off, with four goals in their opening game of the campaign, a 10-0 demolition of third-tier side Bregenz in the OFB Cup, before netting in the 3-1 away win over potential title rivals Wolfsberger AC.

Like Haaland, Daka's biggest strength is his ability to score with either foot or his head; his four goals in the cup game were split equally between both feet, with the first being a thunderous effort from the edge of the box on his supposedly weaker left foot.

Long-range efforts are rare for the Zambian, who uses his clever movement and dribbling ability to get into good positions before scoring. This is reflected in his conversion rate of 36.5 per cent– higher than any striker in Europe's top five leagues last season.

His first goal of the 2020-21 Austrian Bundesliga season was another one for the highlight reel as he collected a long ball on his chest, chipped it over the goalkeeper and then caught it on the volley.

"The player I'm compared to does not exist! It's someone I'm trying to create– and you cannot compare yourself to that," Daka joked to the BBC World Service in June.

Red Bull Salzburg will likely run away with the league again this season, so Daka's best chance to prove himself will come in the Champions League.

He will be confident of showing that he is capable of taking the next step in his career, especially after scoring twice against his boyhood club Liverpool in a pre-season friendly.

However, Daka could even be gone from Salzburg by the time their Champions League play-off game comes around, as he has been linked with a transfer to various sides across Europe, including Kanoute's former side, Tottenham.

Having replaced Haaland as Salzburg's main man, Saka is determined to follow in his fellow forward's footsteps by also playing in one of the game's greatest leagues.

"He's a very great inspiration because I remember very well that different people used to say, 'Erling can only score in Austria' and people think the Austrian league is not really competitive. But I think every competition has its own level," he told the BBC World Service.

"Look at the likes of Sadio Mane, Naby Keita and Minamino– a lot of players that have played here have really excelled elsewhere.

"The club gives opportunities to every person, so I feel for me to be here is a blessing and I also want to utilise this opportunity."