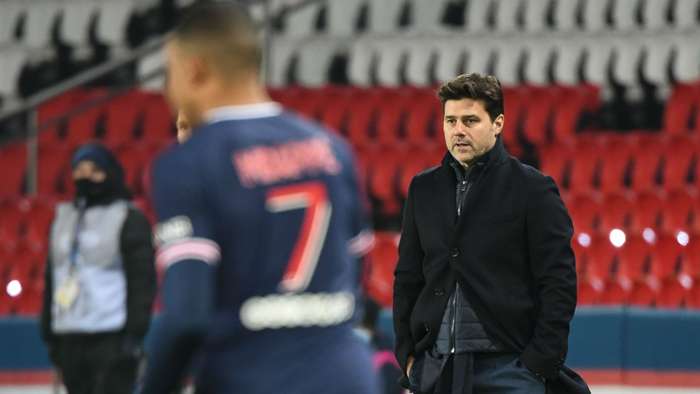 Mauricio Pochettino insists there is still room for improvement from his Paris Saint-Germain side after brushing aside Brest 3-0 on Saturday .

The win, coming three days on from a 1-1 draw with Saint-Etienne in Pochettino's first game in charge, moves PSG within a point of leaders Lyon, who were held 2-2 by Rennes.

But despite the comfortable manner of the scoreline, Pochettino - named as Thomas Tuchel's successor last week - accepts there are still things to work on.

"We are satisfied with the result, it is the fruit of the effort of all the players," he told Canal+.

"But there is still a lot we have to correct. We must continue to work with high standards."

Kylian Mbappe fired a blank for the third time in four outings, failing to find the net from any of his three shots on target - more than any other player on the field.

But the France forward claimed an impressive assist for Sarabia's goal by taking the ball past a couple of opponents and teeing up his team-mate.

He cut a frustrated figure at times but Pochettino is pleased with Mbappe's overall display.

"Mbappe has done good things," Pochettino said. "He had chances and it's a shame he didn't score. But he had a good game."

PSG had 60.9 per cent of the ball against Brest - compared to an average of 63.9 per cent under former boss Tuchel - and attempted 11 shots on target.

Sarabia, who netted his third league goal of the season 27 minutes after being brought off the bench, believes Pochettino's style of play is already clear to see just two games in.

"He wants us to have a lot of the ball and to knock the ball a lot to destabilise the opponent," he said.

"He asks us to do a lot of pressing, very high. It is very important to capture all the ideas of the coach to try to do the best possible.

PSG now switch focus to Wednesday's Trophee des Champions clash with Marseille and a chance to win a first piece of silverware of the Pochettino tenure.

"It's a very special match for Paris and for me too," the former Tottenham boss said.