'There were reports that he was in Bilbao!' - Flick happy for Bayern match-winner Martinez 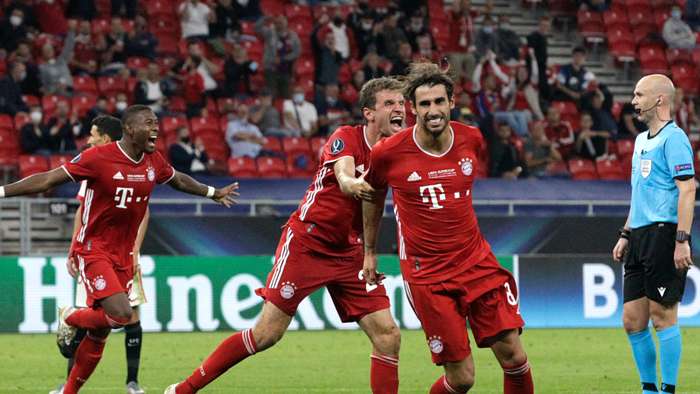 Hansi Flick thought it was fitting that Javi Martinez was Bayern Munich's unlikely Super Cup hero just a day after he was reported to be re-joining Athletic Bilbao.

It was Martinez's first goal since April 2019 and it may be the last of his eight-year Bayern career as rumours of a return to La Liga outfit Athletic persist.

The 32-year-old is in the final year of his Bayern deal, and reports suggest the Bundesliga and Champions League holders want a transfer fee for the midfielder despite Athletic's wish to bring him back to Spain on a free transfer.

"Javi scored the goal and won us the game. Sometimes football writes these stories – this is a beautiful one," head coach Flick told Sky.

"On Wednesday there were reports that he was in Bilbao, yet tonight he scored the winning goal."

Martinez also came off the bench to score an extra-time goal in Bayern's previous Super Cup triumph seven years earlier, when they beat Chelsea on penalties.

"Congratulations to the team and to Javi Martínez, our Mr Super Cup," Muller told UEFA.com.

"We fought hard and showed as a team that we have that winner's mentality, even when we're not at our best."

This time Bayerntriumphed inside 120 minutes, having fallen behind to Lucas Ocampos' penalty before Leon Goretzka levelled prior to half-time.

It may not have been as comprehensive as their season-opening 8-0 win over Schalkein the Bundesliga last week, but Flick was nevertheless pleased with his team's staying power.

"It took the first 15 minutes for us to get into the game," Flick said.