'They talked and it is perfect' - No issue between Benzema and Vinicius, insists Real Madrid manager Zidane 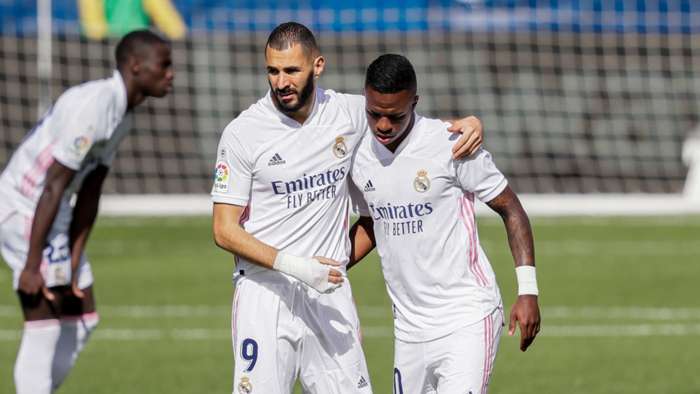 Zinedine Zidane insists there are no lasting issues between Karim Benzema and Vinicius Junior after the Real Madrid striker told Ferland Mendy not to pass to their team-mate.

"Brother, don't pass to him," Benzema told Mendy in the tunnel. "On my mother's life, he is playing against us."

Benzema did not play a single pass to the Brazilian in the second half, having created an opportunity with one of his three first-half passes, while Mendy found Vinicius just twice more before the latter wassubstituted in the 70thminute.

Zidane was not concerned by the part of Benzema - who pulled a goal back before Casemirolevelled- in the conversation, suggesting such exchanges are commonplace but not usually madepublic.

"It is clear about Benzema and Vinicius," Zidane said. "They have talked to each other. Things stay on the field. They talked and it is perfect.

"There is no problem between them - the opposite. In the end, the important thing is that the energy is on tomorrow's game against Huesca.

"Things like Benzema and Vinicius have always happened but they stay on the field. The only thing that has changed is that there are many cameras."

By the time he made way for Eden Hazard, none of Vinicius' three shots had hit the target, with two blocked, while he did not pick out a team-mate with any of his three crosses, although he did create chances for both Benzema and Mendy.

A disappointingly low 71.4 per cent of passes found their man, however, and the 20-year-old completed only two of his five attempted dribbles, but Zidane expects the forward to bounce back as he remains a big part of Madrid's plans.

"Vinicius is young," he added. "He has a present and a future at Madrid. He is a boy who wants to learn and improve. He works and that is good for a coach and a team."