Thiago, Keita and the heavy crown - The questions Liverpool must answer heading into the new season 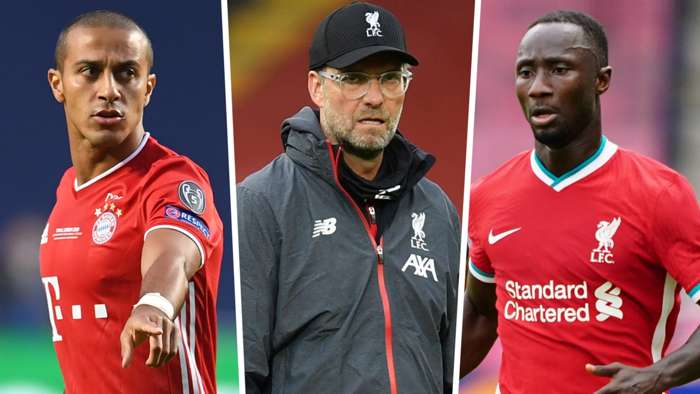 The Reds haven’t won the Community Shield since 2006, but the Premier League champions have the opportunity to add to their already bulging trophy cabinet by beating FA Cup winners Arsenal at Wembley on Saturday afternoon.

After a truncated pre-season, Jurgen Klopp’s side will look to step up their preparations for the new campaign, which gets under way against newly-promoted Leeds at Anfield in a fortnight’s time.

Here,Goaltakes a look at the questions the Reds must answer as they look to defend their league crown in 2020-21...

Whichever way the Thiago Alcantara saga is eventually resolved, somebody is going to be left disappointed.

Either Bayern, who seem resigned to the departure of one of their star men, or Liverpool who, according to German reports at least, have identified the former Barcelona midfielder as someone who can come in and immediately improve their title-winning side.

Anfield sources are remaining tight-lipped on the matter – “unlikely but not impossible,” was one early suggestion – but it is perhaps telling that there has been no outright dismissal of the story as there has been in the past with other rumoured targets, such as Nicolas Pepe or Philippe Coutinho to name but two.

We know that Jurgen Klopp is a fan – let’s face it, who isn’t? – and we know that a fee of around £30 million ($39.5m) will likely be enough to land Thiago this summer, with Bayern keen to avoid losing him for nothing next summer.

We also know that signing a 29-year-old on big wages is not exactly standard procedure for Fenway Sports Group, the Reds’ owners, and that Liverpool are not exactly light when it comes to midfield options – even with Alex Oxlade-Chamberlain and captain Jordan Henderson currently sidelined.

The future of Gini Wijnaldum, into the last 12 months of his contract, may hold the key to any Thiago deal, as could the Reds’ ability to sell the likes of Marko Grujic, Xherdan Shaqiri, Harry Wilson and Sheyi Ojo as was planned, pre-Covid-19.

The numbers have to add up, as frustrating as that may be for supporters to hear.

In July,Goalasked Pep Lijnders, Liverpool’s assistant manager, what was needed for Klopp’s team to continue evolving and to continue winning. “Unpredictability,” was the Dutchman’s immediate answer.

Thiago, surely, would help immediately in that regard; a world-class midfielder with imagination, the ability to resist a high press and a passing range that has even seasoned observers purring.

“I think if Liverpool get Thiago, it the league is done,” says Wayne Rooney, the former Manchester United and England captain. “That is a better signing than Lionel Messi going to Man City.”

Big words indeed, but we will see whether Rooney is proven right.

Can Liverpool afford to sign Thiago? But perhaps the more pertinent question is: can they afford not to sign him?...

Sure, Reds fans like what they see from the Guinea midfielder, but they’d love to see more of it. They’d like him in the team more often, using that unique skill set to dominate games on a more regular basis.

Keita started 38 games across his first two seasons on Merseyside, and has featured in just 43 of a possible 76 in the Premier League. When he’s played, he’s tended to look good – he was particularly impressive post-lockdown – but there have been too many stops and starts for the £53m ($70m) man’s liking.

“Rhythm,” is one of Klopp’s favourite words, and Keita has not always had it.

With Henderson and Oxlade-Chamberlain injured, the former Leipzig man is a certainty to start against Arsenal this weekend. He, along with teenage tyro Curtis Jones, looked sharper than most during Liverpool’s friendly matches in Austria, and he will be looking to take that form into the season proper.

If he does, then watch out.

Because remember; when people hark back to Klopp’s quotes about Thiago being one of the best players in the Bundesliga a few years back, they tend to forget why he was talking about him in the first place.

It was because of Keita.Liverpool's midfield game-changer could already be in place.

We’ve been through this, haven’t we?

Probably not, considering the number of games to be crammed in over the next 10 months.

With Dejan Lovren gone, Liverpool would be well advised to bring in some kind of extra centre-back cover before the window shuts.

When you’ve waited 30 years for the party, then beware the hangover.

Liverpool’s struggles in that department were a little overplayed once the Premier League title had been wrapped up at the end of June.

Sure, they were well beaten at Manchester City and they were punished for sloppiness at Arsenal. They drew at home to Burnley too, meaning they dropped eight points in seven games as champions, compared to seven in 31 beforehand.

They did, however, stick five past Chelsea, four past Crystal Palace and three past both Newcastle and Brighton, post-lockdown. They did finish on 99 points, having wrapped up the league in record-breaking fashion.

And if you speak to anyone associated with the club, they’ll tell you the hunger is still very much there, too.

Jordan Henderson, James Milner, Virgil van Dijk, Trent Alexander-Arnold, Mohamed Salah – you name them, they’ve talked about the next trophy, the next challenge, the desire for more, more, more.

“We will not ‘defend’ our title,” said Klopp back in June, “we will attack the next one.”

He has already christened his players “f**king mentality monsters” – and that was before they won first the Champions League and then the Premier League – but we will see how Liverpool wear the crown of champions, and how the rest of the league responds to the challenge of toppling them.

Can they continue to dig out the results they dug out last season? Can they become even more ruthless, even more cohesive, even more consistent?