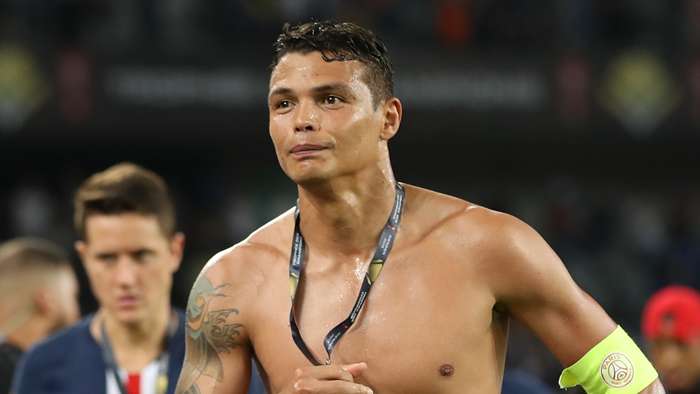 Paris Saint-Germain captain Thiago Silva has confirmed that he will leave the club upon the expiry of his contract.

Signed from AC Milan in 2012, the 35-year-old Brazilian has been a mainstay of the Parc des Princes side for the duration of his stay in France and has won the affection of the fans.

Although he was due to be released at the end of June along with Edinson Cavani and Thomas Meunier, he and striker Eric Choupo-Moting both penned two-month extensions to their contracts to allow them to play in the Final 8 of the Champions League.

PSG got closer to winning the prize than they have previously, falling to a 1-0 defeat in Sunday’s final to Bayern Munich, an encounter that the veteran confirmed will be his last, despite the club’s Ultra groups campaigning for him to be awarded with an extension.

“It was my last game in Paris,” he told RMC Sport. “I am sad. I apologise to the fans. I thank all the supporters for their love. I'll come back, with another role, in this club I loved. I want to play for another 3-4 years and play in the World Cup in Qatar.”

Chelsea and Fiorentina continue to be linked with the centre-back, who head coach Thomas Tuchel paid tribute to in his post-match press conference, suggesting a last-ditch attempt could be made to keep him.

“I'm going to talk about this with the club, Leonardo, and all those who are in a position to create the team,” he said. “Thiago was my captain and it was a pleasure to have a player with quality and personality like him.

“He extended his contract with us for two months. He gave his heart and energy on the pitch, he gave everything to win this Champions League. He deserved to win it.

“We went through some tough times, there were some big disappointments. I'm absolutely proud that he was my captain.