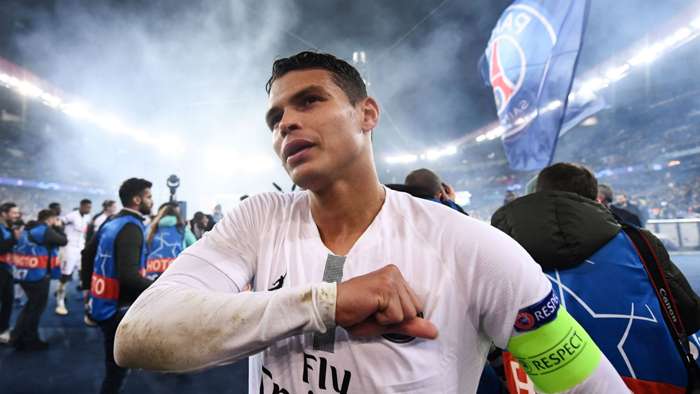 Thiago Silva has been hailed as one of the greatest players in Paris Saint-Germain history by the club’s presidentas he prepares to complete a transfer to Chelsea.

He joined from AC Milan along with Zlatan Ibrahimovic in 2012, going on to play more than 300 times for the club, winning countless domestic honours and reaching this year’s Champions League final.

Silva appeared to confirm his departure on a free transfer on Wednesday, with a social media post extolling the ‘unforgettable moments, inexplicable things and incomparable people' he had experienced in his time at the club.

Now, PSG have posted a video tribute of their own, with president Nasser Al-Khelaifi adding his own message of thanks.

He said:“Thiago, thank you for these eight memorable years, full of lasting memories and for your involvement, your devotion and your spirit. You will forever be one of the greatest players in history, and your legendary status here at PSG will last forever.

“I wish you and your family the best for your future challenges. You will always be part of the family and the history of the club, a big thank you captain!”

Silva is set to provide experience to a much-changed Chelsea side next season, with Ben Chilwell having completed his £50 million ($66m) move from Leicester on Wednesday and Malang Sarr following from Nice on a free transfer within 24 hours.Timo Werner and Hakim Ziyech had already arrived earlier in the window, with more spending expected.

Chelsea remain hopeful of completing a deal for Bayer Leverkusen wonderkid Kai Havertz, while there have also been rumours of a renewed push for West Ham midfielder Declan Rice.

Silva has been backed to shine in the Premier League by Brazilian compatriot Rivaldo, who told Betfair: "At 35, Thiago Silva will sign for two seasons with Chelsea and I'm confident that he will do a great job there, as he is a great centre back with excellent positioning and vast experience of world football.