Thiago, Trent and transfers: How Klopp can get Liverpool firing again after festive wobble 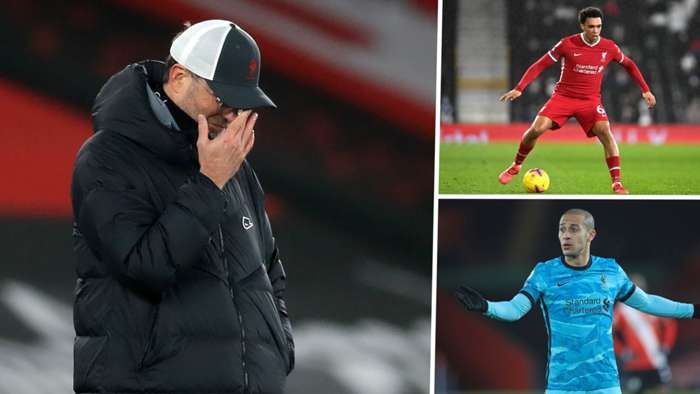 Defeat to Southampton on Monday night, and another low-key performance, prompted Jurgen Klopp to admit he was “worried” about his side’s form.

“We don’t have to make it bigger than it is, but we didn’t win the last three games,” he told reporters at St Mary’s. “It’s our fault, my responsibility.

“Yes, we are worried about that, but football problems, you solve with football, and that’s what we are working on. We know about the situation, we are not silly. And we have to show a reaction, 100 per cent.”

It is certainly not all doom and gloom – Liverpool have still only lost twice in the league all season – but Klopp will hope his side can rediscover their mojo swiftly.

They travel to Aston Villa in the FA Cup third round on Friday, and then face Manchester United in a top-of-the-table clash at Anfield on January 17. They also visit Tottenham and West Ham, and host Burnley, before the month is out.

So, after a below-par festive period, how can the Reds get back to their best?

Here are a few suggestions…

Though it was a defensive lapse which cost them the winning goal at Southampton, it was clear that Klopp’s biggest gripe was with their attacking display.

“We were not calm enough to create the opportunities to turn it around,” he said.

“We were dominant in the right areas, had the moments but then the decision-making was not there. We missed the last pass. I heard now that we had only one shot on target, but we had a lot of shots next to the target!”

That has become something of a theme. Since smashing Crystal Palace on December 19, Liverpool’s edge has been blunted. They scored seven times from 14 shots at Selhurst Park, but have netted just once from 44 efforts in the three games since. They have drawn a blank in each of their last two games, the first time that has happened since May 2018.

Their dry spell won’t last. How can it, when the likes of Mo Salah and Sadio Mane are on the pitch, and Thiago, Trent Alexander-Arnold and Andy Robertson providing the ammunition?

But Klopp needs his star men to find their cutting edge quickly. They cannot afford to let this run continue too much longer.

There were some positives to emerge from Monday’s game. Alex Oxlade-Chamberlain made his first start of the season, while Thiago Alcantara came through 90 minutes for only the second time since joining in the summer.

The Spaniard was not at his absolute best, especially in the first 45 minutes when he was pressed hard by the Southampton midfield, but there were signs in the second period of what he will bring: control, subtlety, the ability to dictate the game and keep teams penned in their own half.

That, of course, will only improve with time. Thiago was signed as a game-changer, a world-class player to improve a world-class team. Fit again after a knee injury, the 29-year-old should be trusted to do exactly that in the coming weeks and months.

The statistic was gold for anyone who runs a football social media account. Against Southampton, Trent Alexander-Arnold gave away possession 38 times– more than any player has in any Premier League game this season.

And while there should be some context added – when you attempt crosses and high-risk passes as often as he does, there is always a chance you will lose the ball – it certainly wasn’t the full-back’s best night.

He was at fault for Danny Ings’ goal, and was substituted for James Milner as Liverpool chased the game.

In truth, Alexander-Arnold’s form has been patchy since he returned from a calf problem last month. He is a high-class performer, but his levels have dipped.

It has been Andy Robertson, on the other flank, who has carried the fight. Alexander-Arnold has looked off-colour, distracted even. And when he is off his game, it affects others – in particular Mo Salah.

He is too good a player not to come through this, and all players are allowed a dip in form, but Liverpool need to get to the bottom of theissue, whether it is physical, tactical or anything else. They need their home-grown hero firing.

It probably wasn't in the plan originally, but it might be an idea for Klopp to play Alexander-Arnoldat Aston Villa. The 21-year-old needs to find some rhythm, and the best place to do that is on the pitch.

OK, so we’ve saved the obvious suggestion until last. Liverpool need to be making a signing this month.

They have played 17 Premier League games this season, and have started with 10 different centre-back pairings. In all competitions, they have fielded 14 separate combinations at the back.

It was two midfielders against Southampton, with Jordan Henderson joining Fabinho. Both emerged with credit, in fairness, but the impact this mend-and-make-do approach is having on the team should not be underestimated.

Fabinho, remember, is one of the best defensive midfielders around, and Henderson is not far behind either. The captain’s influence in midfield, particularly when supporting Alexander-Arnold on the right, is vast. He is missed badly when he is not there.

It has been admirable the way Nat Phillips and Rhys Williams have performed when called upon – especially as neither of them had played a Premier League game prior to October 31 – and yes, Joel Matip– sidelined with a groin problem– should be available again before the end of the month.

But Liverpool have huge games coming up, both domestically and in Europe, and they surely cannot continue to walk this tightrope. An injury to Fabinho, for example, would leave them in an awful position, and history tells you that banking on Matip to stay fit for any length of time is simply not advisable.

January is never an easy market, as Klopp himself admitted recently, and the financial impact of Covid-19 continues to be felt. Liverpool, like all clubs, have been hit hard. That is undeniable.

So too, though, is the need for reinforcement. It won't be easy, but it has to happen. It has to, at the very least, be attempted.