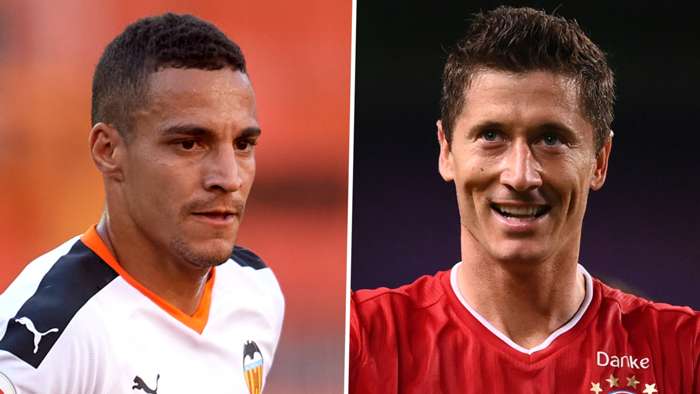 Leeds forked out a club-record fee of £27 million ($36m) to bring Rodrigo to Elland Road from Valencia on August 29.

The 29-year-old had spent the previous five years of his career at Mestalla, where he scored 59 goals in 220games to earna regular spot in the Spain national team.

Leeds supporters will be hoping that he can help Marcelo Bielsa's side avoid an immediate return to the Championship in 2020-21, with the club set to embark on their first Premier League campaign in 16 years later this month.

Thiago says Rodrigo is capable of becoming an even more deadly threat in the final third as he approaches the latter stagesof his career, having seen Lewandowski peak at a similar point for Bayern.

The Spain internationaltold a press conference of the ex-Valencia star's qualities ahead of a UEFA Nation's League clash with Ukraine on Sunday: "He has a huge ability for scoring goals.

"It's great that he helps us to press, to run ... I see similarities with Lewandowski, who has scored a number of obscene goals - but Rodrigo has also scored goals."

Thiago and Rodrigo both played the full 90 minutes of Spain's 1-1 draw against Germany on Thursday, which saw Jose Gaya rescue a late point for La Roja after Timo Werner's 51st-minute opener.

Manchester United goalkeeper David de Gea, who has come in for plenty of criticism for his performances at club level recently, produced a stellar display to ensure that Luis Enrique's men escaped with a valuable point.

Thiago insists he has always been confident in De Gea and the rest of Spain's goalkeeping pool, as he added:"In the end, there are criticisms for the three goalkeepers. They are ours. There are guarantees with the goalkeepers that we have.

"With De Gea, we have lived wonderful situations and the not so good ones he has overcome."

The Bayern star also reserved praise for Barcelona starlet Ansu Fati, who became Spain's youngest debutant in 84 years when he took to the pitch atMercedes-Benz Arena in Stuttgart.

"It is very nice to be able to appreciate Ansu like all those who come," said Thiago."Himespecially, not only for the quality, which is seen, but for the strong personality and, above all, hisdecision-making.