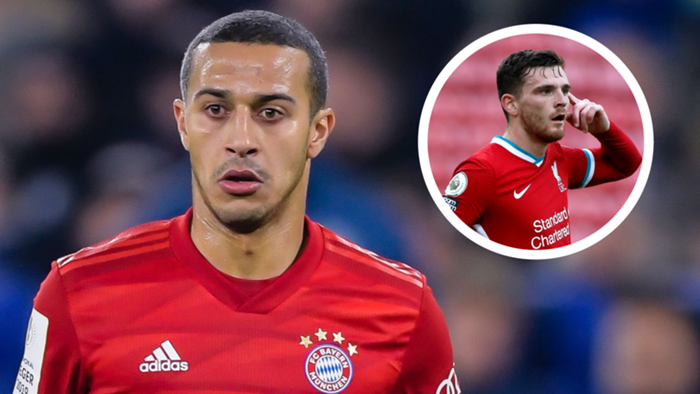 Thiago Alcantara would add to "any team in the world" according to Liverpool's Andy Robertson, as the Reds close in on finalising a move for the Bayern Munich playmaker.

The move would arguably be considered one of the bargain buys of the transfer window, with the midfielder set to bolster an already formidable side who began their first domestic title defence for three decades in a seven-goal thriller against Leeds United last Saturday.

With Liverpool were yet to officially confirm the news on Thursday as they flattened out the fine print of their move for the treble-winning star, Robertson played relatively coy on Thiago's arrival.

But the Scotland defender still managed to profess his excitement at the likelihood of linking up with the former Barcelona man while praising the club's ability to get fans excited with their business on and off the field.

"When you're at a club like Liverpool, you get linked with players all the time," he told Sky Sports News."For us,we focus on our squad.

"Nobody is in Melwood, in terms of Thiago, or any other player just now linked with anew signing. In terms of that, until something's signed on the dotted line, we don't listen to rumours.

"In terms of us, our aim is to excite fans. We excited fans last season - they believed we might have won the league by Christmas time last season - but we didn't.

"I've watched him, he's a fantastic player, full of talent and he would add to the quality of the squad of probably any team in the world. So if we get him, great.

"If we don't, it is what it is but we'll wait and see until it's definitely confirmed and then I can maybe sit down again and talk about his qualities."