Tottenham asked for Shkendija goals to be replaced because they were 'too small', says Mourinho 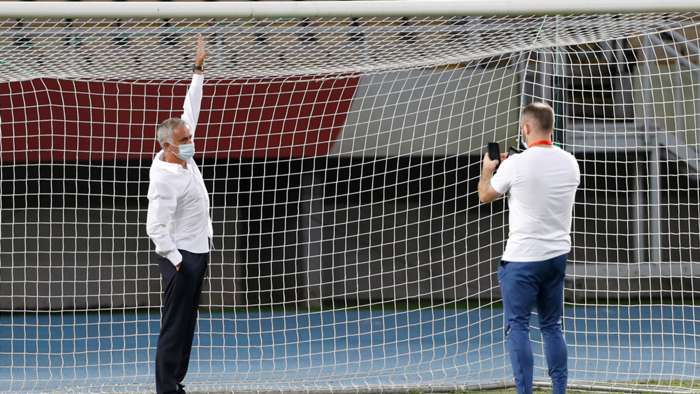 Jose Mourinho has revealed that Tottenham asked for Shkendija's goals to be replaced because they were "5cm too small".

Eric Lamela opened the scoring for Mourinho's side with just five minutes on the clock, but the hosts fought their way back into the game and were eventually rewarded when Valmir Nafiu hit an equaliser shortly before the hour mark.

However, Tottenham regained the lead through aSon Heung-min strike in the 70th minute, before substitute Harry Kane rounded off a 3-1 victory for the north London outfit .

Mourinho saw his side move to within one more game of the Europa League group stages by building on a morale-boosting 5-2 win at Southampton last weekend, but only after being forced to askShkendija to provide goals with the correct dimensions.

The Portuguese says the issue was brought to his attention by one his first-team goalkeepers before kick-off, as he told a post-match press conference: "Before the game was a funny situation because my goalkeeper told me the goal was small.

"I went to see and it was small. The goalkeepers spend all their time in them so we know.

"I felt immediately something was wrong and we got the UEFA delegate to come in and it was 5cm too small. We asked for goals of the right dimensions."

Mourinho added on Spurs' latest European performance: "We didn't play magnificently but we did the job.

"In the first half we were 41 minutes without scoring and then we gave them space to play. In the second half, after our changes, and I like to see players come in and make an impact and the players who came on made a difference.

"We started very strongly and the thought was that we would kill the game but we didn't. They gave us a difficult match and the fear we felt after the equaliser was fundamental to the team's reaction and then it was difficult for them to contain our attacking waves."

The Lilywhiteswill now look ahead to a Premier League meeting with Newcastle on Sunday, which comes just four days before they welcomeMaccabi Haifa to the Tottenham Hotspur Stadium.