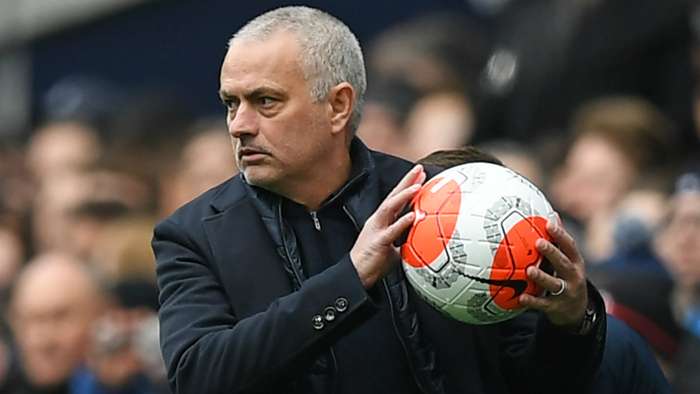 Tottenham boss Jose Mourinho has backed the proposal for the Premier League's new five substitutions rule to continue through to the 2020-21 season.

All top-flight clubs were granted two drinks breaks per 90-minute match, one in each half, with managers allowed toselect larger squads of up to 20 players for all remaining fixtures.

The number of substitutions allowed per game was also increased from three to five, in a bid to minimise the risk of injuries during in acongested schedule.

Premier League clubs are now set to vote on whether or not to the make the changes permanent, with the new season set to get underway on September 12.

Mourinho didn't feel the need to make the maximum number of substitutions in any of Tottenham's final nine outings, but he says having the option to shuffle his pack could be valuable tool going forward.

"The five subs, I don't mind it. In the majority of matches, myself, I felt no need for that," the Portuguese head coach said ahead of Thursday's vote.

"But one thing is no need, another thing is no chance. So if you have the chance to do it, I don't think it's a problem.

"Because it can only be done in three periods, it doesn't affect much more the real-time of the game, coaches cannot stop the game five times as you know. I think it's fine.

"I don't see a problem at all with that."

Mourinho added on the benefits of picking a larger squad for each match:"I like the 20 players in the squad. It doesn't make any sense to travel with 20 players and then you arrive in the stadium and have to send two guys to the stands when the clubs pay every player and invest in every player.

"And it's much better for a manager to have on the bench a right-back, a left-back, a centre-back, a winger, a midfielder, a striker.

"It's much better to have everything there because it's the ammunition you need. For all tactical reasons, beauty of the game, competitivenessof the game, it's a fair way to treat players because they want to feel they're in the game, and they feel that on the bench.

"It's different to staying at home. So the 20 players on the bench, I love it.

"It gives you more chance to bring young people on and gives a much better feeling to everybody. Twenty players on the bench, I think very, very good."