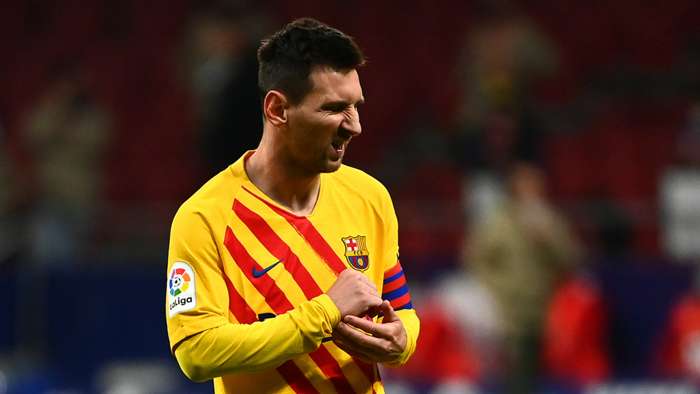 Argentine subject of tug-of-war between City and Barca

Manchester City are prepared to offer Lionel Messi a lucrative 10-year deal at the Etihad Stadium, according to theDaily Star.

The Argentina captain is also being courted by Barcelona, who are desperate to keep their idol after he asked to leave over the summer.

Gunners not willing to part with forward

Arsenal have no intention of sanctioning a loan move for Nicolas Pepe, claims The Times.

The Ivorian forward has struggled for form throughout his spell with the Gunners, and saw red on his most recent outing against Leeds, but those at Emirates Stadium will be keeping faith and not moving the winger out in January.

Manchester Cityhave been warned off a move for Lionel Messi byBarcelonapresidential hopeful Victor Font, with theLa Ligagiants still confident that they can convince a talismanic presence to stay put.

Font told L'Esportiu de Catalunya: "I already told him (City CEO Ferran Soriano) to forget about Messi, to look for alternatives to win theChampions League, because Messi will continue with us and we will win the Champions League."

Leicester are said to have had a bid for the Portugal international midfielder knocked back over the summer, with the Foxes ready to rekindle their interest in January.

The World Cup-winning defender is due to become a free agent in the summer of 2021.

Forget what you may have heard - rumours of Jadon Sancho's decline have been greatly exaggerated.

While it is true that Sancho has not been at his best this season, few players ever even reach the benchmarks he has set in his career so far.

A long summer of transfer drama and speculation sawManchester Unitedfail to make a big enough offer for the 20-year-old, who remains atBorussia Dortmundfor at least another season.

The Saints want to bring in the 20-year-old on loan when the transfer window reopens.

United may be open to offloading Williams, who has only featured in two cup games for United this season.

Arsenal have reopened contract talks with teenage strikerFolarin Balogun over a new contract - as the Daily Mail reports.

The 19-year-old's current deal expires in June, but the Gunners are eager to tie him down to fresh terms.

Balogun came close to joining Sheffield United over the summer, but the Blades baulked at his £15 million ($20m) price tag.

Liverpool and Everton are vying for the signature of Villarreal strikerSamuel Chukwueze - according to La Razon.

The Merseyside rivals are prepared to battle in the transfer market for the 21-year-old, who has a £71 million ($95m)release clause in his current contract.

Chukwueze has scored once in 11 outings across all competitions for Villarreal this term.

David Moyes is weighing up a January swoop for the Frenchman, who could be available for around £30 million ($40m).

Dembele has endured a poor start to the 2020-21 campaign at Lyon, drawing a blank in his first 11 Ligue 1 apperances.

Odegaard joined Sociedad on a season-long loan from Madrid in July 2019, which marked his third temporarymove away from Santiago Bernabeu since his arrival in the Spanish capital four years prior.

The Norwegian was a big hit at the Anoeta as he contributed four goals and six assists to helpImanol Alguacil's side finish sixth inLa Liga, and also played a key role in their run to the Copa Del Rey final, which has been postponed until supporters are allowed to return to stadiums.

Eddie Nketiah has been urged to push for a loan move away fromArsenalthat will allow him to “get kicked”, with Kevin Campbell looking for the 21-year-old to find regular game time.

The former Gunners striker has told Football Insider: "Nketiah has a knack for goals but Ithink he needs to go out on loan for another season, playing back-to-back games to get that confidence in his own body."

Crystal Palace defender Patrick van Aanholt has emerged as a transfer target for Ajax, according to Football Insider.

The Dutchman has spent the last 13 years in England, having initially linked up with Chelsea in 2007, but could be offered the chance to head home and link up with an Eredivisie heavyweight.

Granit Xhaka has no desire to leave Arsenal and will snub any advances from Inter, claims Calciomercato.

The Swiss midfielder has seen a January move to Italy mooted, potentially as part of a swap deal involving Christian Eriksen.

Valencia have identified Shakhtar DonetskwingerYevhen Konoplyanka as a transfer target - according to Todofichajes viaX Sport.

The Spanish club are looking at the 31-year-old as a potential replacement for Denis Cherishev, who is expected to return to Russia next year.

Konoplyanka has fallen down the pecking order at Shakhtar in recent times, and may be open to a new challenge in La Liga.

Sheffield United midfielder Sander Berge is the subject of interest from Arsenal - according to VG.

The Gunners considered a move for the 22-year-old earlier this year, and may reignite their pursuit in 2021.

Berge has scored once in nine Premier League outings for Sheffield United at the start of the new campaign.

The 28-year-old's relationship with the Nerazzurri has been damaged following his criticism of the club's transfer policy.

Alberto may be offered the chance to stay in Serie A with Juve or Inter, but Everton are also weighing up a bid for the Spanish playmaker.

Henrikh Mkhitaryan is close to signing a new contract at Roma - according to Gazzetta Dello Sport.

The 31-year-old's current deal expires next summer, but the Giallorossi are hoping to officially announce a renewal for the midfielder before Christmas.

Mkhitaryan has contributed five goals and four assists in eight Serie A appearances for Roma this season.

Birmingham City have sealed a deal to sign Alen Halilovic.

The former AC Milan midfielder has signed a deal until next summer.

The 31-year-old is a free agent after being released byFC Cincinnati last month.

Former Brazil international Maicon could be heading to play for Sona in Italy’s Serie D.

The club’s president claims he has contacts in Brazil who say the player is keen to return to Italy, where he has business interests, and could turn out for Sona.

Representatives from the MLS side have made intial contact with Heinze, who is believed to be interest in further discussions.

The 42-year-old is a free agent after quittingVelez Sarsfield earlier this year.

Initial discussions have taken place over a potential deal

Real Madrid have held talks with Inter Milan over a potential swap deal involving Isco and Christian Eriksen, according to Sky Germany.

Denmark international Eriksen has struggled to recapture his best form since joining Inter from Tottenham in January, with theNerazzurri ready to cut their losses. Spain international Isco meanwhile has expressed his desire leave Los Blancos because of a lack of regular action.

West Bromwich Albion have held talks with an American consortium over a possible £150 million ($200m) takeover, according to the Telegraph.

West Brom's controlling shareholder Guochuan Lai turned down an offer earlier this year but is still open to a full takeover bid or selling a minority stake.

However, Lai's £150m asking price is deemed too high while the Baggies' Premier League future is at stake, with the club currently bottom of the table and without a win so far this season.

The Belgium international revealed earlier this month that he has been in discussions over fresh terms, with an agreement now reached on a deal that will keep him at Etihad Stadium until 2025.

The new deal will also see the 29-year-old become the joint-highest paid player in the City squad alongside Raheem Sterling.

Mexico youth international Alex Alcala has joined LA Galaxy with Manchester City having an option to sign the 15-year-old when he turns 18, according to ESPN.

The teenager, widely seen as one of Mexico's brightest young talents, will initially linkup with the Galaxy academy underJuan Carlos Ortega.

City will track his progress and have the option trigger a set buy-out fee after he turns 18 and will becomes eligible to leave the United States.

Borussia Dortmund are tracking the progress of Brentford forwardMarcus Forss, according the The Athletic.

The 21-year-old is enjoying a breakthrough season in west London, with six goals in 13 appearances so far for the Championship club.

He also scored on his international debut for Finland in their friendly win against France last week, where Dortmund and another Bundesliga club sent scouts to watch him in action.

TakefusaKubo is ready to quit loan club Villarreal and return to Real Madrid in January, according to El Periodico Mediterraneo.

The 19-year-old is on a season-long loan at Unai Emery's side buthas grown frustrated at his lack of regular first-team football and does not want his career to stall.

Kubo has started just once in La Liga so far this campaign, with his other three starts coming in the Europa League.