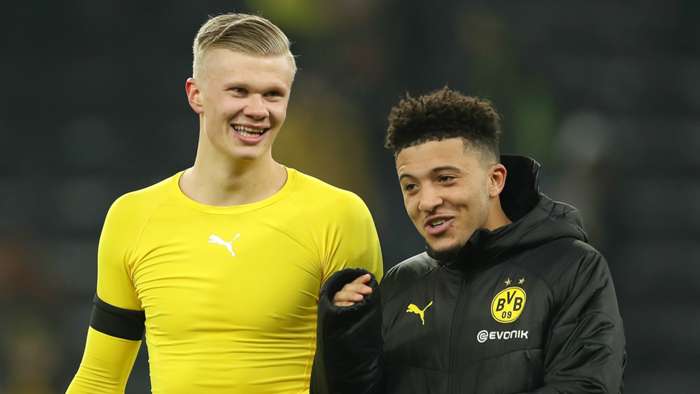 The Norway star is wanted at Old Trafford

Manchester United are contemplating whether to make another bid for Jadon Sancho next summer with his Borussia Dortmund team-mateErling Haaland emerging as the club's top priority, according to the Mirror.

The Red Devils believe they made the right decision not to meet Dortmund's asking price for Sancho last year and are now questioning their need for the attacker.

Haaland, meanwhile, has been in the club's sights for some time and his stellar form is keeping them interested in a possible future deal.

Lucas Vazquez admitted the ball is in Real Madrid's court when it comes to whether he'll sign a new contract.

"We'll go for it and see what happens, it does not depend only on me," Vazquez told Movistar on Saturday.

"I'm playing a lot now and I want to continue working for the team."

Frank Lampard admits that Kai Havertz isn't at his physical best having suffered from'severe' symptoms of coronavirus in November.

Chelsea signed the 21-year-old former Bayer Leverkusen midfielder for £70 million ($94m)in the summer but he has found himself on the bench in the last three games.

Indeed, he has only shown flashes of the talent thatattracted the Blues to sign him in the first place.

West Brom manager Sam Allardyce has demanded the club make a number of winter signings if they are to avoid relegation.

"We have to get a better player than we already have and see if that is available," Allardyce said after a 4-0 loss to Arsenal on Saturday.

"The squad needs a boost and if I have ever saved a club from this position, and I have, it is because we have had the capabilities of bringing a player in in January."

Manchester United will sanction the sale of Paul Pogba this summer, reports the Mirror.

The Red Devils have accepted the Frenchman won't sign a new deal at Old Trafford and will now look to cash in on their star midfielder whose current contract runs until 2022.

Real Madrid, Juventus and Paris Saint-Germain are all reportedly interested in making a move for Pogba.