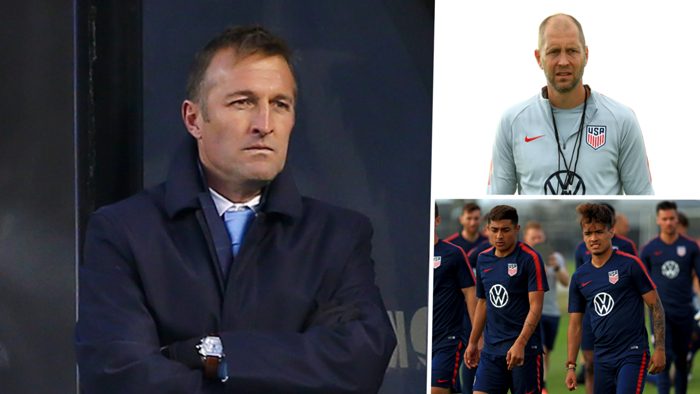 By and large, Jason Kreis had 2020 all mapped out.

And what an Olympic squad it could have been. Virtually all of the U.S. men's national team stars, such as Christian Pulisic, Gio Reyna, Sergino Dest, Tyler Adams and Weston McKennie, are Olympic eligible.

It isno guarantee that Kreis could have gotten any or all of those players to Tokyo this summer, but, with no other major tournaments to compete in, there was always a chance.

Then 2020 happened. Just before the squad convened, CONCACAF's Olympic qualifiers were postponed indefinitely due to the coronavirus. The Olympics were pushed back soon after, moved to July 2021.

The schedule was completely shaken up, and Kreis' plans were out the window. Now, he and the U.S. U23s are one piece of what will be a hectic 2021 in American soccer.

The Olympics, obviously, remain a priority, but they areno longer the only showin town. The U.S. will now be focusing on three other tournaments: the CONCACAF Nations League, the Gold Cup and the U20 World Cup.

And then there isthe small matter ofWorld Cup qualifying to worry about when that kicks off in June.

In some ways, the first step towards facing that challenge comes this week as Kreis joins the staff of the USMNT for the group's first camp since February.

The squad features 19 players that would be eligible for next summer's Olympics,with 14 of those players also being under the age of 20.

As a result, the current gathering of players in Wales is not just a gathering of the USMNT, but also of potential figureheads of the age-groupteams.

"I think that the roster was put together because these players are all very interesting for U.S. Soccer," Kreis told Goal. "So there's never any piecing out about, 'This player is interesting to the 20s, this one's for the 23s, this one isfor the full team'. Not at all. It's just this group of players that is interesting for the entire program.

"I just think we have to be knowledgeable about the entire pool regardless of whether or not we project them to be available or not, because projections oftentimes are wrong.

"We've got to be ready and prepared and we're going to ask the questions, we'll get back the answers and then make decisions from there. All in all, it's it is going to bea very, very busy schedule and very difficult for us to hash out who was going to go where, but in the end I think that there's enough talent and the pool's big enough to support everything."

It will have to be. The Olympics overlap directly with the Gold Cup in July-August, while World Cup qualifiers, the Nations League and the U20 World Cup will all take place in June.

While the likes of Pulisic, Reyna and co. would form the dream Olympic squadKreisunderstands that there isa slim chance that the USMNT's biggest stars will be with him next year should they seal their spot in Tokyo.

The USMNT will always take priority and, even if Kreis does have his eyes on certain players, there is no guarantee that clubs will cooperate.

Club sidesare not required to release players for youth competition, with U.S. Soccer running into that issue a few years back when Schalke denied a request to release McKennie for the U20 World Cup.

As a result, the qualification squad released in Marchwas largely MLS-based.Just five of the 20 players called up for that team were from outside of MLS, with two -Richard Ledezma and Uly Llanez -among the senior team call-ups gathering in Wales as part of this largely European-based squad that is absolutely loaded with youngtalent.

However, several of the players that headlined the March squad may very well have now "graduated".

Brenden Aaronson's star may have burned too brightly with the Philadelphia Union, and his move to Red Bull Salzburg has likely vaulted him into the senior ranks.

The same could be said for his team-mate Mark McKenzie, who has rapidly become one of the best defenders in MLS and, perhaps, the USMNT pool.

And then there isReggie Cannon, who was part of the qualifying roster despite being a consistent part of the USMNT squad.

"I reallyenjoyed my time with them," Kreis said."I will, of course, hope that there will be more,but I think you're correctly identifiedthat's going to be probably a difficult prospect for sure for Brendan andI could see Mark having to move up as well.

"For every one of those guys, there have been otheryoung players around the leaguethat have taken major step forwards as well.You always want the best for those players you want to develop as quickly as possible, and can't be too concerned with anything else."

Kreis, meanwhile, insiststhat Ledezma and Llanez remain "interesting" forhim, as well as for the senior team. The duo havetaken a step forward since Kreis saw them last, with Ledezma recently making his senior debut for PSV while Llanez'ssenior career has truly gotten going on loan with Heerenveen.

But, while bothare more familiar to Kreis, the most intriguing aspect of this camp is the unfamiliarity. A total of 10 uncapped players are with the USMNT this month, with several of them having minimal experience even at the youth level.

Johnny Cardoso has earned one U23 cap but, after emerging with Internacional in Brazil, is now with the senior team.

Leicester's Chituru Odunze's most prominent international experience came at the2019 U17 World Cup while Wolves' Owen Otasowie has only played as high as the U18s.

Dual nationals such asNicholas Gioacchini and Yunus Musah, meanwhile,are getting their first tastes of what U.S. Soccer is all about.

And that does not even coverthe likes of Chris Richards andKonrad de la Fuente, who have been starring for the U.S. at the youth level for some time.

"I wouldn't rule outtoo many of these guys," Kreis said."There arethe ones that clubs are never going to allow them to come to qualification,but there are othersthat theirsituation may change over the next six months and ultimately, you never know who you might come to find outmight be available."

"I can't necessarily control them or push them the way I would want, of course, but I'd love to have the best possible squad," he added."So I just haveto think a little bit outside the box whenthese players aren't available. Who is next? How many players in each position do we have that we like that can help us to qualify?"

Kreis believes that there will always be players, likeReyna orPulisic, that skip steps. Several of the players in this camp may do just that themselves.

But, in Kreis' eyes, the Olympics are nota normal youth tournament. It isnot a World Cup, and for some countries it is not a priority at all. For the U.S., though, it is, especially given the failures of the last two cycles that arguably kickstartedthe 2018 World Cup qualifying downfall.

As such, Kreis does not expect there to be manysurprises should the U.S. make it to Tokyo. His squad, he says, will not be put on the backburner, despite the busy schedule.

"There are special players out there that are ready for that type of jumpa lot earlier than others, but I think the Olympics is a little bit of a different thing," he said."I don't look at the Olympics, the same way that somebody might look at an U20 World Cup. Ithink the Olympics are a once in a lifetime opportunity for any athlete.

"I think ultimately we're going to hope for -and I think that the national program and U.S. Soccer would support us -some guys that that have already graduated themselves to be full team player would then go represent us in the Olympics, because I think it's that special of an event."

Before the Olympics, before qualifying and even before focus turns towards the U23s, U.S. Soccer has to navigate this camp.

The USMNT will take on Wales in Swansea and then travel to Austria to face Panama in their first matches since a February friendly against Costa Rica.

And Kreis is glad to be part of the USMNT's long-awaited return. This camp is a starting point, a kickstarter for what will be a busy 12 months for Berhalter, Kreis and, ultimately, American soccer.

"National team camps are a pure joy to be a part of, pure joy to work with players who are alleager to represent their country," he said."There's no sort of baggage about.You don't have any of that and you get to work with elite staff members.

"We as U.S. Soccer need to be very focused on just getting this first camp done safely and done well. Then we can start to have conversations onwhat's next, but, of course, the full team needs to be the priority and the focus."