USMNT or Chile? Soto the latest dual-national at the centre of a recruiting battle 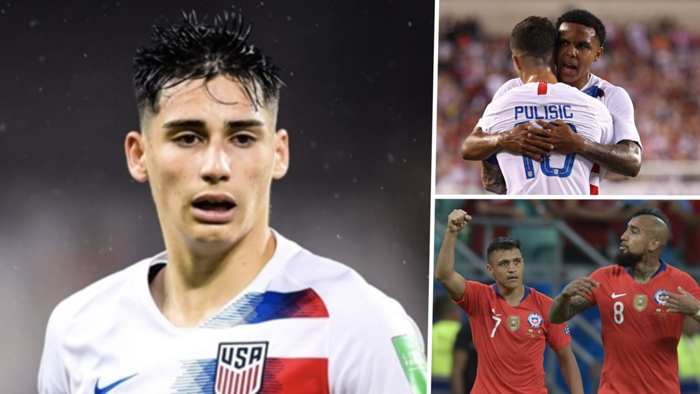 The U.S. men's national team has had their fair share of battles recruiting dual nationals and, for the most part, the program has come out pretty well.

There have been losses, though.

Giuseppe Rossi famously opted to represent Italy, his parents'homeland, and only injuries kept him off an Azzurri World Cup roster.

Jonathan Gonzalez, a highly-regarded midfielder in Liga MX, chose to represent Mexico and is still working to find a spot with El Tri.

Former Borussia Dortmund defender Neven Subotic, meanwhile, is another one that got away as he went on to represent Serbia at the 2010 World Cup.

Aside from those names, the U.S. has either brought in or kept hold of most of their top prospects. There have been pipe dreams, like Trent Alexander-Arnold orThomas Delaneythat "got away", even if they were realistically likelyto transfer overin the first place, but the U.S. is rarely on the losing end of a true recruiting battle.

But that may be something that the programwill have to deal with in the very new future: the loss of a potential USMNT prospect.

Faced with the decision of continuing on with the USMNT or representing Chile, forward Sebastian Soto is the latest prospect at the center of a battle for his international allegiance.

The California native has featured for the U.S. throughout his time as a youth international. He has been a regular for the U.S. at Under-19, U20 and U23 level, having most recently played for the Olympic-eligible team last October.

With the USMNT set to hold a camp in Europe in November and with Soto currently in-form forDutch side Telstar, he seems like a prime candidate to be called into Gregg Berhalter's squad in the very near future.

But whether that happenswill heavily depend onSoto actually accepting a call-upwere it to come his way.

The forward was contacted by Chile in October regarding a potential call-up for their World Cup qualifiers. In need of new blood, the South American side werelooking to immediately bring in the forward, whose father is Chilean.

Initial reports suggested thathe had accepted that call-up, but Soto himself has stated that he is still waiting on a Chilean passport as he mulls over his future.

He has been in frequent contact with Chile bossReinaldo Rueda, who has earmarked him as a potential addition to anageing squad that still relies heavily on the old guard of Alexis Sanchez, Arturo Vidal and Eduardo Vargas.

“The decision process is coming,” Soto told NH Sport.“I think it should be time to make a decision in the next few days even.Maybe in the next week or two.”

He added:“I don’t have my Chilean passport yet, and to be honest we are working on that. I didn’t say no to Chile at all. Me and the coach stay in contact a lot. Rueda, he’s a really good guy.”

The interest in Soto comes at a particularly vital time for the forward, who is just now finally starting to find his way at the club level while on-loan in the Netherlands.

Soto has long been solid for the U.S. at the youth level, having shoneat theU20 World Cup last year. At that tournament, Soto netted four goals for the U.S., tied for second-most in the tournament. The only player to score more? Erling Haaland, who has done fairly well for himself in the months that have followed his goal explosion in Poland.

But while Haaland took that form and carried it into a breakout atclub level, Soto did not.

After making his Bundesliga debut for Hannover in April 2019, he made just two further appearances that totalled 16 minutes in the 2. Bundesliga last season.

Making matters worse, he played just three matches with the reserves in theRegionalliga, Germany's fourth-tier, in what turned out to be a wasted year of development.

Soto's lack of playing time was largely determined by his refusal to sign a new contract with the club, paving the way for his exit this summer as he joinedNorwich City before beingloaned to Telstar after being denied a work permit to play in England.

Now getting consistent games for Telstar, Soto has thrived. He has scoredfive goals in his first six games, including a stunning brace in a 2-0 win over Helmond Sport last Friday.

For all of the talent coming through, the U.S. is still desperate for an out-andout goalscorer to play up front. Soto and Josh Sargent, who currently features for German side Werder Bremen, are seen as two of the more promising answers even if, until somewhat recently, Soto was seen more as long-term prospect than a potential USMNT call-up.

When asked about Soto's decision, Berhalter spoke highly of the 20-year-old, who is a player the USMNT boss wants involved for years to come.

"He's a player we really like, he'sbeen in our program," Berhalter told Sirius XM FC."All we want to do is create an environment that players want to be in.

"We don't like to lose players. There's no way I'd be happy about him going to play for Chile because we feel like he can be an important player for us in the future.

"It's trying to create an environment players want to be in, it's trying to play a way player wants to play, and hoping they choose for us.

"Sergino Dest is another guy, he had options. He could have easily played for Holland and he decided to play for us. So we try to do the work on our end to keep these players."

While the USMNT need more strikers, Chile certainly do too.

The team's golden generation is fading, and the days of competing for, and winning, the Copa America year-in and year-out look to be gone.

Like the U.S., Chile missed out on the 2018 World Cup, finishing sixth in CONMEBOL qualifying as fifth-placed Peru earned a spot in the inter-confederation play-off on goal difference.

Most recently, Chile earned one point from World Cup qualifiers against Uruguay and Colombia, with Sanchez andVidal scoring the three goals acrosstwo games.

It is a model that is unsustainable. Sanchez is 31 while Vidal is 33. Vargas turns 31 in November while regulars such asFabian Orellana, Edson Puch, Charles Aranguiz,JosePedro Fuenzalida, Gary Medel and Mauricio Isla are all on the wrong side of 30.

There isa generational shift that will need to occur with Chile, and Rueda seems to believe Soto can be a part of that.

In some ways, there are no bad options here for Soto. He can either represent his country of birth and a team with a potential opening at his position in the years to come.

Or he can play for his father's homeland, a team that is begging for young stars to step up and earn their spot among some legendary figures on their way out.