USMNT or England? Musah's standout debut a big win for Berhalter in international tug-of-war with Southgate 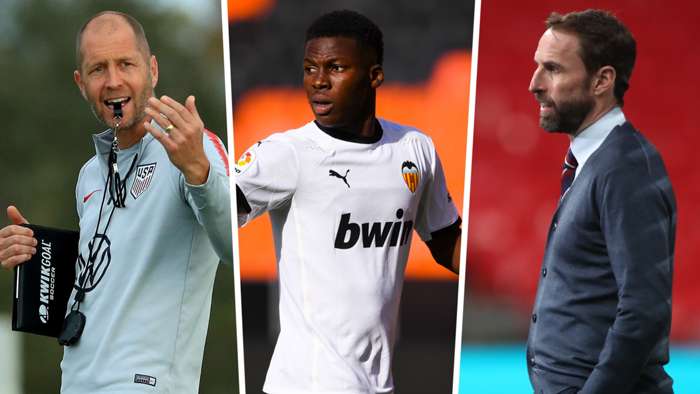 Yunus Musah's U.S. men's national team debut went about as well as it possibly could.

So, that's one question answered, the one about whether he can be a key factor for the USMNT ahead of a chaotic 2021 campaign. We now know that Musah is, in fact, ready for this level despite only being a few short weeks into his senior career.

Now, though, a second question comes into focus: when World Cup qualifying rolls around next summer, will Musah still be involved?

When U.S. Soccer announced that Musah would be one of 10 newcomers called into the U.S. squad, the general reaction was one of surprise. It's not that he hadn't earned the spot, because he certainly had. His play at Valencia, including a recent goal for the Liga mainstays, has seen him become recognized as one of the top young players in Europe.

That surprise was a result of Musah's international history. The teenager was born in New York to Ghanaian parents before eventually moving to Italy and, ultimately, London. It was in England that he emerged as a star in Arsenal's academy, and it was the Three Lions' youth teams that he captained before he made his move to Valencia in search of a first-team spot.

Until a few weeks ago, Musah's connection to the U.S. seemed like a meaningless piece of trivia, similar to Trent Alexander-Arnold's American ancestry. Now, Musah seems like he could be a key cog in the USMNT should he ultimately decide to be.

On Thursday, Musah started alongside Weston McKennie and Tyler Adams, two players that have emerged as the heart and soul of this young U.S. squad. And at no point did he look out of place.

Musah was comfortable on the ball, strong in his ability to shield it and, by and large, he made the right play when he needed to defensively. Alongside Adams and McKennie, Musah helped the U.S. boss the midfield throughout the first half, offering a glimpse into what could be if the U.S. is able to build around that trio in the years to come.

Ahead of the Wales match, U.S. coach Gregg Berhalter hailed Musah as a "special player", and he did nothing to dispel that idea throughout a comfortable debut.

"Real quality on the ball, on a bouncy field under pressure," Berhalter said of his performance."He was maybe lacking a final ball, which we know he can deliver, but he worked really hard."

Thursday's effort will be the type of performance that will get England boss Gareth Southgate thinking. Musah has been a regular for England all the way up to the Under-18 level, having also previously served as captain.

However, even with the USMNT's wealth of young talent coming through the ranks, it is fairly easy to see that the path to the senior team would be much more direct with the U.S. than England.

Able to play either centrally or on the wing, Musah's efforts against Wales showed that he could be comfortable as a No8. It is at that position that he likely has a better chance of shining for England, with stars like Jadon Sancho, Callum Hudson-Odoi, Marcus Rashford, Jack Grealish, Mason Greenwood and Raheem Sterling all competing for spots in the England attack.

Even with Thursday's appearance, Musah's international future remains uncertain, though. Playing for the U.S. during this international break won't cap-tie him, with the first chance to do that coming in June.

There will be plenty of questions about him until that moment but Southgate says he still has hopes of bringing the teenager back to the England setup.

“I know John McDermott, assistant FA technical directorhas spoken with the family and they know where we sit with it,” Southgate said earlier this week.

"But also we want to get that balance right of not just pushing him up the age groups quicker than we think is right because we’ve got other boys in the system as well, and we don’t want to promise things that we can’t fulfil.

"It sounds as though he’s going to meet with America this time and experience that. That doesn’t rule him out of being with us moving forward, so, we’ve just got to make sure that the boy and the family know that we think he’s a good player, that he’s on a good trajectory.

“We’re monitoring him. He’s been with us in the last couple of months and we’d very much like his future to be with us.”

And so begins the tug of war. It's not the first nor the last the U.S. will be in. Sergino Dest was a high-profile one, with the Barcelona defender opting to represent the U.S. over the Netherlands. And fellow USMNT newcomer Sebastian Soto has been the subject of one as well, with Chile looking to call up the on-loan Telstar striker.

When Dest committed to the U.S., he said it was because the program showed faith in him. He grew up with the U.S. youth teams, while Netherlands didn't come calling until his Ajax breakthrough. He wanted to respond to loyalty with loyalty while also taking the chance to become a building block of a new-look USMNT.

In these sorts of recruiting battles, there are so many factors. Players' decisions will directly impact their futures, both financially and in terms of club opportunities. But, at the end of the day, sometimes these decisions come down to pure emotion.

U.S. U23 boss Jason Kreis says that, from the top down, U.S. Soccer's aim is to simply be there for those dual-nationals. Reaching out and working with a player can go a long way and, in cases like Dest's, could be the deciding factor.

This call-up is the USMNT's first real effort to reach out to Musah, and Kreis says it is vital to show players that the program is genuine.

"I think it's important that we show we care," Kreis told Goal last week. "That's always important whether you're coaching a club team, national team or a youth team.

"As a coach and as a leader of a group that wants to put together the best team possible, I think it's important you show that you care about these guys, not just as soccer players but as people in general."

He added of Musah: "He is a young player but he's already played first-team football in La Liga.This is a player forU.S. Soccer that we're really really high on and really are interested to see what he looks like in our group. He's just a player that I think all of us are excited to have and to work with."

At just 17, Musah now looks like he could potentially be a future star alongside fellow newcomer Gio Reyna . The USMNT is as loaded with young talentas its ever been, and permanently adding Musah to that player pool could be something that takes the U.S. to another level.

But that decision will come in time. Before all of that gets going, the U.S. still has a friendly against Panama on Monday, one which could see Musah earn his second cap with the USMNT.