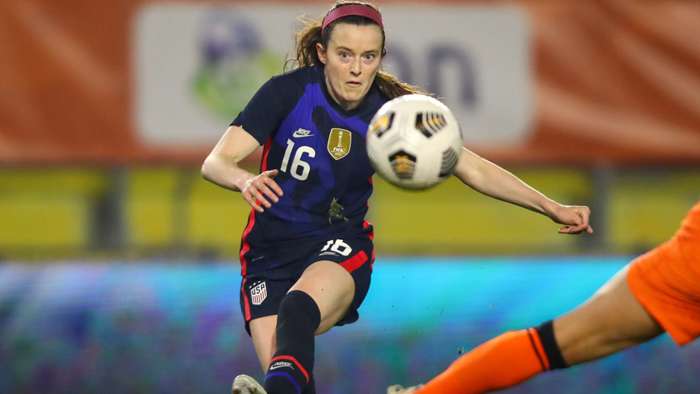 Rose Lavelle is ready to show what she can do at Manchester City after her stunner against the Netherlands on Friday, according to U.S. national team coach Vlatko Andonovski.

The attacking midfielder was hampered by an ankle injury to delay her City debut by a few weeks, and head coach Gareth Taylor has rotated her through a number of attacking roles outside of her preferred spot as a No.10.

Lavelle has netted twice in cup action for City and that scoring prowess was demonstrated again for the USWNT against the Dutch, as she curled in a left-footed beauty from the top of the box just before halftime.

Kristie Mewis would go on to score in the second half as the USWNT won 2-0 in their first match since March.

Andonovski was impressed with Lavelle’s goal not just for its inch-perfect accuracy, but also because it came directly from the training ground.

“Our assistant coach Milan Ivanovic spent a lot of time with her in individual sessions working on that exact move and exact shot in that same exact spot,” Andonovski told reporters after the game.

“The fact that she was able to soak up the information and implement it in a game and against an opponent like the Netherlands just makes me happy because it tells us how coachable she is and as good as she is.”

Andonovski insisted that he wasn’t necessarily surprised Lavelle hasn’t gotten fully up to speed with City yet, but backed her to use her goal on Friday as a jumping-off point to further establish herself in the Women’s Super League.

“I don't know if I expected any more or less with her playing time,” the coach said. “She needed a little bit of time to adjust one thing and then she had a small injury going into her debutso that’s why I don't know if I had any different expectations.

“But she’s finally healthy, she’s playing well, she’s mentally in a good stage and the fact that she scored a goal like this proves that she’s ready and she’s a very good player.”

USWNT defender Crystal Dunn wasn’t surprised to see Lavelle net a stunning goal, saying the attacker does the same thing on a daily basis in training.

“Rose is an incredible player,” Dunn said. “She’s a young player but she plays so much beyond her years. She’s proven time and time again that she is skilled and an elite player at this level.