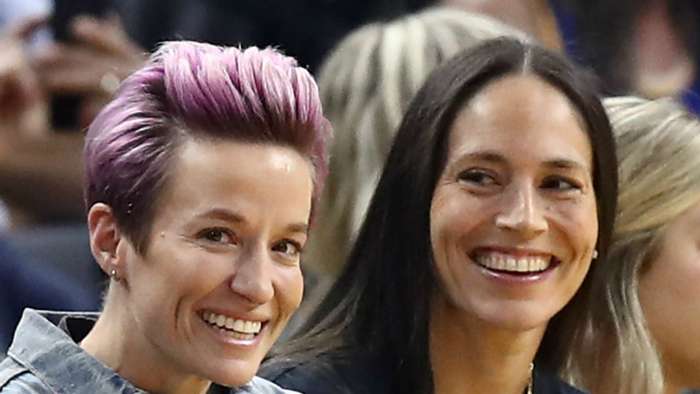 Two-time Women's World Cup winner Rapinoe, who was hugely influential in last year's triumph at the finals in France, met Bird at the 2016 Olympic Games in Rio.

They announced they were a couple in July 2017, and Bird has now posted a picture on Instagram of Rapinoe putting a ring on her left hand.

Speaking to ESPN three years ago, Rapinoe explained how she and four-time Olympic gold medallist Bird found love, saying: "We have a lot in common and just sort of clicked. I joke she is my number onego-to-for-advice person. She's just so level-headed."

Earlier this year, Rapinoe offered to be the running mate for Biden, the Democratic Party's candidate.

The 35-year-old has used her platform to speak out on societal issues including racism, homophobia and the gender pay gap.

She drew the ire of incumbent U.S. president Donald Trump having said she had no intention of visiting him if the USWNTwon last year's Women's World Cup.

Rapinoe has been on a hiatus from the game, having last seen the field in March. She skipped the Challenge Cup and the fall series with her NWSL side OL Reign this year.

After she opted out of October's USWNT training camp,head coach Vlatko Andonovskisaid he still hasRapinoe in his plans moving forward.

"Of course we’re in constant communication with Pinoe," Andonovski said. "We had a good talk and Megan said that she didn’t feel like now was the right time to come back to the team, and had some physical concerns as well so we’ll continue to monitor her.