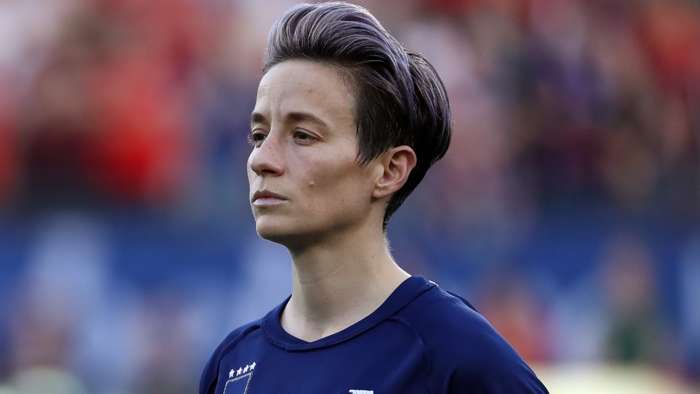 U.S. womens national team star Megan Rapinoe hit out at U.S. Soccer during prepared remarks before a congressional committee on Wednesday, accusing the federation of fighting against the teams pursuit of equality.

On Equal Pay Day, Rapinoe appeared before the House Oversight Committee fora hearing designed "to examine the economic harm caused by longstanding gender inequalities, particularly for women of color," according to a press release.

The USWNT forward, a two-time World Cup winner,has been at the forefront of her teams gender discrimination lawsuit against U.S. Soccer.

In Rapinoes prepared opening statement she said: "Its my honor to be in front of you today. Its probably no surprise, but equal pay and equality in general is a deep and personal passion of mine.

"What weve learned and what we continue to learn is that there is no level of status, accomplishments, or power that will protect you from the clutches of inequity. One cannot simply outperform inequality or be excellent enough to escape discrimination ofany kind.

"I am here today because I know firsthand that this is true. We are so oftentold in this country that if you just work hard and continue to achieve - you will be rewarded fairly. Its the promise of the American dream. But that promise has not been for everyone.

"The Womens National Team has won four World Cup championships and four Olympic gold medals on behalf of this great country. We have filled stadiums, broken viewing records, weve sold out jerseys, all the popular metrics by which we are judged.

"Yet despite all of this, we are still paid less than our male counterparts– for each trophy, of which there are many, for each win, each tie, each time we play. Less.

"In fact, instead of lobbying with the womens team in our efforts for equal pay and equality in general, the U.S. Soccer Federation has continually lobbied against our efforts and the efforts of millions of peoplemarginalized by gender in the United States.

In a statement provided to Goal, U.S. Soccer president Cindy Parlow Cone said: "Megan has always represented the United States Women’s National Team and our country with honor and distinction.

"We thank and applaud Megan for being a champion for equal pay. With our new leadership at U.S. Soccer and so much to look forward to, my hope is the players will accept our standing invitation to meet and find a path forward that serves the women’s team now and in the future.

"We, too, are committed to equal pay. In the meantime, U.S. Soccer will continue to be a global leader in investing in women’s soccer to drive the growth of the women’s game across the world."

Rapinoe fielded questions from a number of members of the U.S. House of Representatives, addressing issues related to equal pay and transgender rights.

In December, the USWNT and U.S. Soccer reached a settlement over one portion of the teams lawsuit, involving unequal working conditions.

The settlement allowed the USWNT to move forward with their appeal over a federal judges May 2020 ruling in U.S. Soccers favour over the teams pay discrimination claim.

Rapinoe: I put on the USWNT shirt for equal pay, not for U.S. Soccer

Horan opens up on body shaming during PSG spell