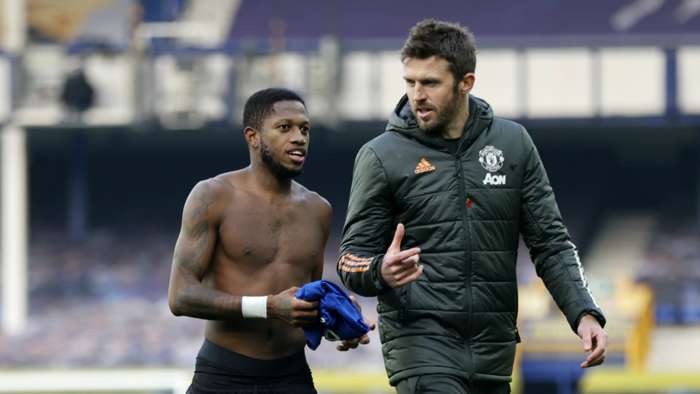 Just eight weeks ago, the writing was on the wall for Fred’s Manchester United career.

There were doubts overhow he was going to fit into Ole Gunnar Solskjaer’s system and the midfielder was forced to respond to claims he might be on his way after an inconsistent spell at Old Trafford.

"I want to stay here – that’s my desire. I don’t want to leave,"he told FourFourTwo in September. Despite Van de Beek’s arrival, Fred's position in the squad was never truly under threat and Solskjaer never considered selling him.

Since those doubts first emerged, Fred has pushed his way back into the starting XI and has again becomean integral part of the side.

Solskjaer called for his players to show ‘passion and fight’ ahead of the clash against Everton at Goodison Park on Saturday and, for all the criticism that hasbeen thrown at the former Shakhtar Donetsk man, his commitment has never wavered.

Like Scott McTominay, who played alongside him on Saturday, the work rate is unquestionable.

"I’m sure Fred covered every single blade of grass on that pitch. It’s unbelievable how that boy just recovers for the next one,"Solskjaer said after the 5-0 win against RB Leipzig in the Champions League two weeks ago.

That was one of three big games the Brazil internationalhas impressed in over the past fewweeks -performances which have been built on Fred’s own determination and desire to improve.

It had been a difficult couple of yearsfluctuatingbetween periphery squad player and starter. And while he was struggling to get into the team at the start of this season he was working hard away from the club’s Carrington training base with his own trainer, whohe meets with on a daily basis in an attempt to improve his fitness.

He has been working on his quality of movement, enabling the 27-year-old to produce high energy levelsuntil the last minute as seen during the 3-1 win against Everton.

Despite it being his third start in 10 days, he maintained a consistency until the final whistle that was key to the team’s victory. His pass completion rate of 91 per centwas the highest of all the starters and he has developed a relationship and understanding alongside McTominay, which suits them both and aids the team.

"Scott and Fred have done brilliant together,"Solskjaer said at full-time. "They're a great partnership. Of course, they didn't start during the week. Scott played 45 minutes in Turkey but you can see they have fresh legs.

"With Bruno Fernandes's goals, Scott and Fred with that energy and in that engine room are always key for us so our creative players can go on, create chances, show their magic. They're so disciplined and very pleased with the two of them."

His average number of tackles, recoveries and interceptions have all increased and while that brought him praise against Leipzig it was his forward play that was notable against Everton.

He found pockets of space in between the lines to facilitate United attacking moves. He had the joint-most passes in the opposition half (39) with an 87% accuracy rate.

Of course, he has room for improvement. His performance against Arsenal in the defeat last weekendwas dreadful and he was replaced shortly after the hour mark, losing possession 11 times and managing just 84% passing accuracy.

That day he was supposed to be the deepest player in the diamond and he lost the ball too easily in the centre of the pitch. Thomas Partey and Mohamed Elneny won the battle in midfield and it was further proof that he performs best when he has somebody alongside him.

Havingthe right attacking / defensive balance in midfieldis key to United getting results. That’s something Fred will have toimprove on andhe also has to prove to his manager that he is the safest option to safeguard the back four.

His tenacity, work rate and fight have all endeared him to supporters as well as Solskjaer. With Paul Pogba struggling for form, Fredshould have no problem in keeping his position in the starting XI for the time being.

The challenge now is for him to keep it for a prolonged period of time. To do that means havingconsistency - eradicating those erratic passes andbuilding on his defensive improvement.