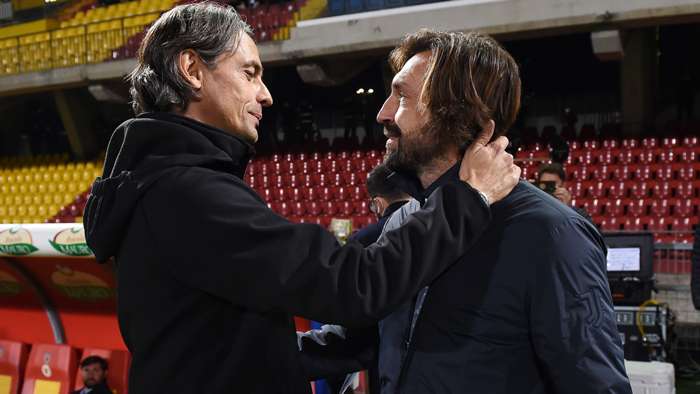 While trying to explain just howJuventushad been beaten at home by Benevento on Sunday, Andrea Pirlo told Sky Sport Italia, "It was a bad day in every respect."

Its certainly easy to understand why he felt that way. The clouds gathering over the Allianz Stadium had only darkened after an inexcusable 1-0 loss to a newly promoted side that had left Pirlos Juve 10 points behind Inter at the top of the Serie A table.

The title race appears over, the dream of a 10th successive Scudetto dead. Pirlos sole focus now is finishing in the top four, and even that might not be enough to spare him the sack.

However, there was one glimmer of optimism to be gleaned from an otherwise "bad day", and it came from an unlikely source.

When the full-time whistle blew at the Allianz Stadium, a visibly frustrated Cristiano Ronaldo headed straight down the tunnel, while Pirlo tried desperately to remain poker-faced at the end of a truly shocking setback.

However, at the very same time, Beneventos coach was just 10 metres away, revelling in the most high-profile win of his coaching career to date.

There are plenty of people in football that believe that one should refrain from celebrating a victoryover a friend or former club. But Pippo Inzaghi is not one of them.

Were talking about a manwho would derive the same joy from a deflected tap-inat the end of a routine win as Marco Tardelli after his decisive strike in the 1982 World Cup final.

So, there was never any chance of a reserved reaction from Inzaghi after watching his Benevento side beat Juventus in their own backyard.

He roared with delight when Rosario Abisso brought an end to the game beforevigorously embracingeach and every member of his coaching staff. And rightly so.

This was no tap-in. This was a bolt from the blue. And Inzaghi wasnt the only one celebrating wildlyeither. Others had got even more carried away.

Up in the stands, the jubilant Benevento sporting director Pasquale Foggia had even tried to hoist his president, Oreste Vigorito, into the air.

"He may have forgotten I weigh more than 70 kilos!" a laughing Vigorito told Sky Sport Italia as he revealed that the pair had ended up crashing to the ground.

The 73-year-old still felt as if he werewalking on air, though, given what he had just seen unfold on the field. "Sometimes," he said, "David beats Goliath."

This was something else, though. This was real. This was truly miraculous. Benevento, after all, had arrived in Turin without a win in their 11 previous games.

The weekend before, Inzaghi hadnt even been allowedout to speak to Sky after a dreadful 4-1 loss at home Fiorentina. Instead, Foggia appeared in his place, informing the media the team would be going into ritiro (retreat) to try to work out "why these performances are happening".

The last thing a free-falling Benevento seemingly needed in a climate of such tension was an away game against a Juve side determined to kickstart their Scudetto challenge after a humiliating Champions League exit to Porto.

Veteran midfielder Nicolas Viola admitted that even the players didnt really believe they could win. Inzaghi, meanwhile, confessed that had prepared a losing speech.

That was partly down to superstition, he explained, but also because he was mainly just hoping to see his players perform with pride; to provide evidence that they were still fully behind their boss.

He got exactly what he was looking for – and more – in a deserved win over the champions which came courtesy of Adolfo Gaichs second-half strike.

Sitting 16th in the table and now, far more importantly, seven points above the relegation zone, Benevento are in an excellent position to secure another season in the Italian top flight.

It would be an extraordinary achievement, given in their only previous Serie A campaign, in 2017-18, they were relegated with just 21 points, having conceded 84 goals.

Inzaghi, then, is on the verge of something truly commendable, something few would have ever thought him capable.

As a player, he was the ultimate goal-poacher: utterly obsessed with scoring. His perceived selfishness upset some team-mates, while his awkward style and lack of elegance meant he was hardly a purists favourite.

Those who championed fair play, meanwhile, were incensed by his constant exaggeration of fouls. Inzaghi, though, would do anything to gain an advantage. He was a forward who played on the edge – and the last shoulder of defenders. He didnt just flirt with the offside flag; they hooked up incessantly.

Off the field, SuperPippo was renowned as something of a playboy. Former Juve midfielder Fabian ONeill revealed some years ago how Inzaghi used to host parties frequented by all of the most beautiful showgirls from Italian TV.

Inzaghi, then, was regarded as a romancer of women, rather than a leader of men. Yet after an encouraging two-year stint in charge of AC Milans Primavera (Under-19s), he was made senior team coach following Clarence Seedorfs dismissal in June 2014.

It did not go well, with Inzaghi sacked at the end of his first season, and criticism quickly followed, most memorably from Adil Rami.

"I observed them while they were at work and I thought how difficult it would be to become a coach like them. But then Inzaghi arrived and he convinced me that anyone can do it. He was a catastrophe!"

Inzaghi, perhaps wisely, elected to drop down a couple levels to hone his managerial skills, taking charge of Lega Pro outfit Venezia in 2016. The gamble paid off. He earned plaudits, promotion and, eventually, a return to Serie A for the 2018-19 season, after being hired by Bologna.

His second stint in the top flight arguably went even worse than his first, though. Inzaghi was fired again, in January 2019, and this time having won only two of his 21 league matches at the helm.The way in which Sinisa Mihajlovic immediately got more out of a reasonably talented squad only made Inzaghi look worse.

"Hes a joke," Ibrahima Mbayes agent, Giuseppe Accardi, told Calciomercato.it. "It’s no guarantee that a former champion will automatically become a fine coach. Perhaps it’s better to dedicate yourself to a different pursuit when you don’t have the skills for this profession..."

Accardi wasnt the only one who now felt Inzaghi might not be cut out for the world of coaching. After the Bologna debacle, there were major and legitimate question marks over his tactical acumen and motivational powers.Even Benevento duo Vigorito and Foggia had their doubts when they went for dinner with Inzaghi in the summer of 2019.

Le Streghe (The Witches) had finished third in Serie B the season before but missed out on promotion via the play-offs. So, they wanted to see if Inzaghi was really the right man to help them take that final step, and were pleasantly surprised by the World Cup winners understanding of the game.

"For the first time, a coach sat in front of me and did not even grace me with a glance," Vigorito told Tuttosport. "Inzaghi spoke only with Foggia and he spoke only of football.

"At a certain point, he moved his knives around, he transformed his forks into players and, after moving the glasses too, he designed systems on the tablecloth for two hours, as if he were already the Benevento coach. I was dumbstruck...

"In Pippo, I saw a love for football, for the magical sphere that made him a world champion and, for the past two years, he has been bringing good fortune to Benevento.

"Our coach is a 47-year-old man in love with a world which he experiences like a kid. I have no pretensions about understanding whether a coach is good or bad. I leave that to my directors.

"But I am able to understand the human side of things and Inzaghi, before being a champion, is a true kid: authentic and sincere."

Beneventos players took just as quickly to Inzaghis child-like love of the game. They were amused by how seriously he took their training-ground games of football-tennis – but also inspired by his passion.

They took Serie B by storm last season, their march towards promotion only ever in doubt during the coronavirus-enforced suspension of play last spring.

Benevento eventually finished 14 points clear at the top of the table and impressed during the first half of only their second ever season in Serie A.

However, their form since the turn of the year had flatlined by the time they took to the field in Turin. That was what made their victory so surprising, and so satisfying for Inzaghi.

His joy wasnt just about the biggest win of his coaching career to date. It was about the journey up until this point, which is precisely why he felt compelled to speak to Pirlo after the game.

"Andrea doesnt need my advice but I told him to stay calm," Inzaghi told Sky, "because Ive also been through these difficult moments."

Indeed, hes had more than his fair share up until now. But he kept going, kept learning and kept improving. Now, hes doing better than ever before.

Sunday was indeed a "bad day" for Pirlo. And worse may be to come.