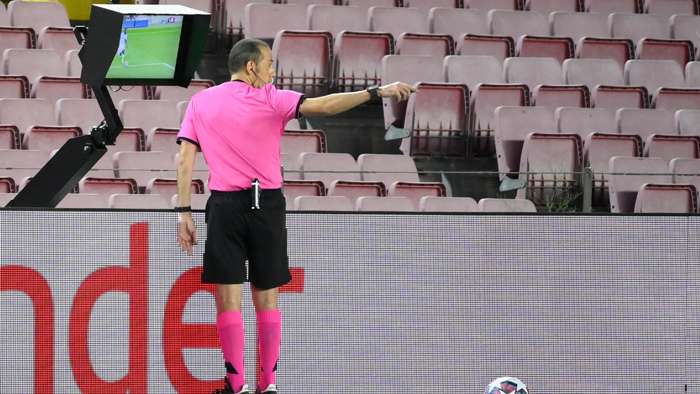 The first half of Barcelona's Champions League last-16 tie against Napoli was filled with action and excitement, but there was also no shortage of controversy thanks to the actions of the ever-divisive Video Assistant Referee (VAR).

First Napoli were incensed when Clement Lenglet's opening goal was allowed to stand, despite replay footage showing that the defender had clearly pushed his marker aside before heading home from a corner with nine minutes on the clock.

Lionel Messi then doubled Barca's lead on the night with an outstanding individual goal, only to find himself on the wrong side of a VAR call minutes later.

The Argentine thought he had doubled his tally after chesting down Frenkie de Jong's cross in the box, but after a lengthy consultation Cakir deemed that he had used his arm to control the ball before firing past David Ospina.

But there was still more drama to come, as the video assistant awarded Messi a penalty after the Barca captain was pole-axed by a clumsy challenge from Kalidou Koulibaly. Leo was still smarting from that hit, leaving Luis Suarez to step up and convert.

At least there was no doubt around Napoli's sole strike of the half, a clear penalty decision four minutes into injury time dispatched with expert precision by Lorenzo Insigne.

Both teams, then, were left with cause to gripe over VAR, and they were joined by plenty of observers on social media who questioned the use of the technology.