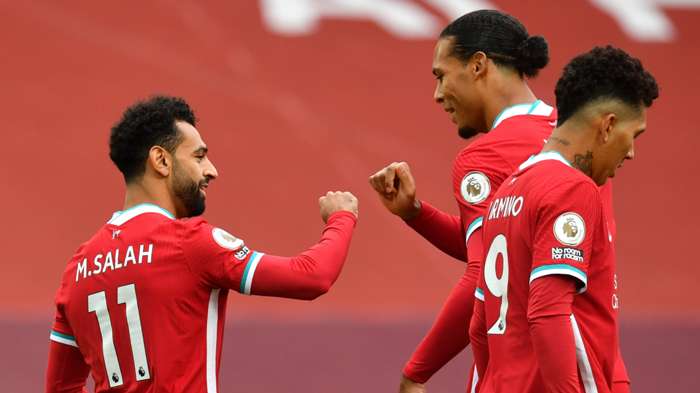 Liverpool defender Virgil van Dijk brushed off any suggestions Mohamed Salah was in a form slump before scoring a hat-trick in the club's 4-3 win over Leeds United on Saturday.

The reigning Premier League champions squandered leads on three seperate occasions before Salah slotted home an 88th-minute penalty to wrap up all three points for Jurgen Klopp's side.

The Egypt international had opened the scoring after just four minutes from the spot before claiming his second in spectacular fashion in the 33rd minute.

Van Dijk, who himself headed home a rare goal in the 20th minute, believes Salah's performance was far from a one-off and questioned the media for ever doubting him.

"Well that's the media, you guys, doubting him. Obviously, we appreciate him and that's the most important thing for him as well," Van Dijk told beIN Sports post-match.

"We don't see the negative parts of what the media says."

While the Dutch centre-back did get his name on the scoresheet against Leeds, he did make an uncharacteristic error that allowedPatrick Bamford to make it 2-2 in the 30th minute.

Van Dijk has nowmade two errors leading directly to a goal in his last four Premier League games, more than he registered in his first 154 appearances in the competition.

"It was one of thosesituations that can happen. I tried my best, that's what I did and unfortunately a goal came out of it but I don't worry about it," Van Dijk said.

Asked about the game itself, he added: "Eventful. Something that we obviously expected, the intensity at least. Nobody wants to concede goals and it was an intense game for both sides. A lot of running, 1v1s and counter-attacks.

"The points are massive of course. They're going to give a lot of trouble to manyteams in the league I think with the way they play and intensity. It was good for us to get the three points but we will have plenty of things to work on."