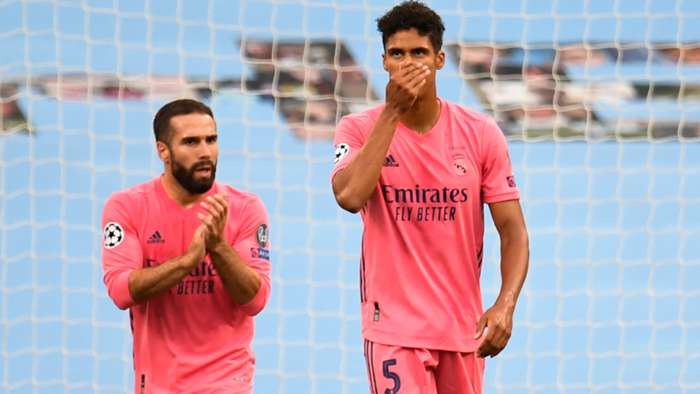 Raphael Varane admits to finding it “difficult” to make peace with the fact that his “mistakes” cost Real Madrid in a Champions League horror show against Manchester City.

The Blancos centre-half is a World Cup-winning defender, but he endured an evening to forget at the Etihad Stadium in early August.

Zinedine Zidane’s side arrived in England full of confidence on the back of a La Liga title triumph, but their European dreams were to be dashedas they suffered a second 2-1 defeat to City of the last-16 stage.

Varane was largely responsible for their demise, with Gabriel Jesus robbing him of the ball to tee up Raheem Sterling for the opening goal at the Etihad.

The France international then nodded straight into the path of Jesus when trying to find Thibaut Courtois as Real’s continental ambitions unravelled in Manchester.

Varane held his hands up afterwards and concedes that it took some time for him to shake a disappointing performance from his system.

The 27-year-old told beIN Sports: “Yes, for sure that will not remain a very good memory in my career. It was a difficult game for me, this elimination.

“Immediately after the match I wanted to take responsibility, I made some mistakes, it cost us the victory.

“The days that followed were a bit difficult, I admit, but at the top level, you have to look ahead quickly.”

With Varane now looking to the future, as Real prepare to open their 2020-21 campaign, he is once again looking to prove that he boasts the talent and leadership to slot in alongside Sergio Ramos – and potentially succeed a Blancos legend as skipper at some stage in the future.

“Am I ready to take the leadership after Ramos? What is certain is that we are very complementary in our way of playing,” Varane said.

“We have qualities that complement each other perfectly, we have been playing together for several years, so we know each other very well. In defence, itworks in pairs and this understanding is very important.

“For the future, after the departure of Ramos, it is difficult to predict things for yourself. I am a leader in my own way. With my team-mates I talk a lot before matches, we talk about tactics, positions. We each have our own way.

“For the future it's difficult to plan, Real Madrid is a very, very big club with great players. What is important is that everyone plays their part in the team.

“When we won our titles, our Champions Leagues, it was as a team, with 11 leaders on the pitch each time.