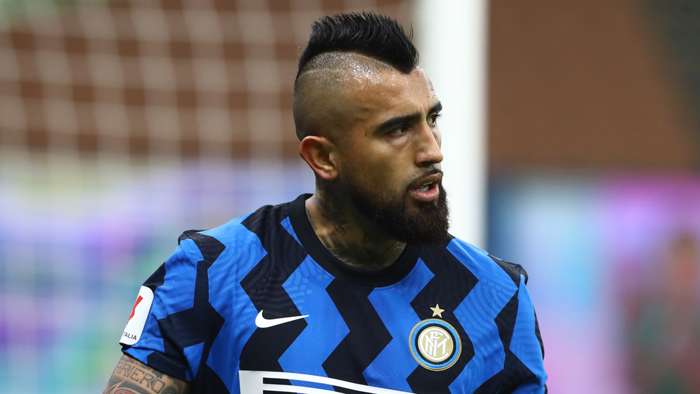 The agent of Inter midfielder Arturo Vidal has claimed that there have been multiple offers for his client, but stressed that he has no intention of leaving San Siro.

The Chilean enforcer is a favourite of Antonio Conte, taking in 30 appearances across all competitions thus far in 2020-21.

He is currently sidelined after undergoing knee surgery, giving him time to assess his future. His representative, however, insists he is going nowhere.

Speaking to La Gazzetta dello Sport, Fernando Felicevich said: “It is normal that there are offers for someone of his level, but he is staying at Inter.”

Inter currently sit at the top of Serie A, six points ahead of cross-town rivals AC Milan with a game in hand.

With Contes men looking nailed on to lift the title, Vidal is said to be hungry for even more silverware next season with the Italian trainer.

“[Vidal] wants the Scudetto now, then the Champions League next season,” Felicevich said of the 33-year-olds aspirations.

Asked how his client is coming along as he recovers from surgery, he added: “Hell be back on the pitch soon.”

Inter are said to be hopeful that Vidal will return to first-team training in mid-April, meaning he could feature in a crunch clash with Napoli.

Before that, the Nerazzurri will take in dates against Bologna, Sassuolo and Cagliari.