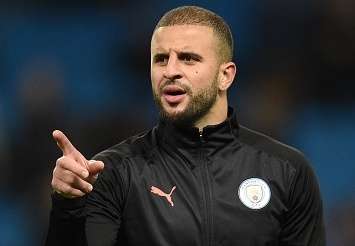 Kyle Walker has aired his pride at becoming a Manchester City centurion amid fierce competition from big-money signings at the Etihad Stadium.

Pep Guardiola quickly identified the full-back areas as being a top priority for him in the transfer market.

Walker was among those drafted in during an initial flurry of activity, but there have been many more defensive additions since then.

Danilo and Joao Cancelo are among those to have been acquired by the Blues to battle it out for a right-back berth.

They have seen game time, with Brazil international Danilo now on the books at Juventus, but Walker has remained a go-to man for club and country.

That has allowed him to reach 100 Premier League appearances for City, with the 30-year-old hitting that mark in a meeting with former club Sheffield United.

“It's massive for me,” Walker told reporters on a notable achievement.

“From when I first signed here, there was me and Danilo, then Joao Cancelo came, so I have always had competition.

“To rack up the amount of games that I have done in such a short space of time is probably credit to myself, but I still feel great.

“I feel fresh, hungry, I'm so hungry to win more especially with this club and with this team because I feel that we work so hard.

“People don't see what we do off the field to try and make sure that when game day comes, we are ready, we know what to do in our roles and responsibilities for this team.

“To make 100 Premier League appearances is fantastic in any club but at Manchester City it's a really special achievement.”

Walker marked his City century with a match-winning goal at Bramall Lane and is determined to add to the two Premier League titles and four domestic cup successes that he has already taken in with the Blues.

“Liverpool did it last year, which was bitterly disappointing, but they really deserved that. They were on fire. So, for us, we need to bounce back from that and try to take that crown back.

“As a personal point, we helped Ederson, not just me, the rest of my team-mates too, we helped him to get the Golden Glove last year which is a big step in the right direction for us as defenders because we just want clean sheets.