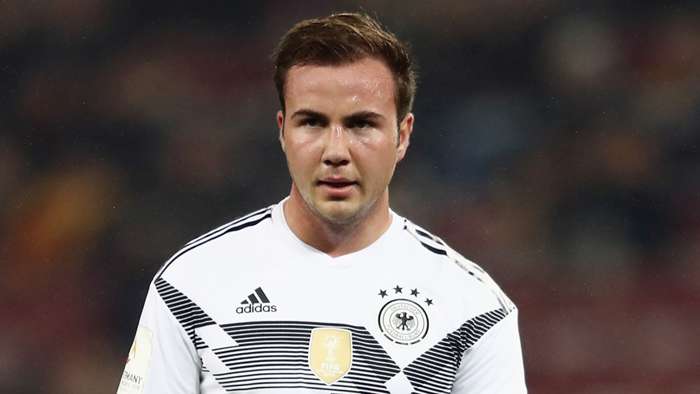 Joachim Low says he is keeping the door open for Mario Gotze to return to the international fold with Germany.

The 28-year-old's career took a nosedive after his crowning moment in Brazil, with Bayern Munich deciding to sell him back to Borussia Dortmund two years later following a string of fitness issues.

His second spell at Westfalenstadion was equally underwhelming, and he was eventually allowed to leave the club as a free agent in the summer transfer window.

PSV took a chance on Gotze when they handed him a two-year contract on October 6, in the hope he could rediscover the form which saw him emerge as one of the top midfielders of his generation.

The Dutch outfit have since been rewarded for their calculated riskas the ex-Bayern star has scoredthree goals in his first six appearances, with his latest effort coming in a 3-0 home win over Willem II on Sunday.

Low has been impressed with Gotze's recent performancesand hasn't ruled out calling him up to the international fold again if he continues on his current trajectory.

"We don't lose sight of him, of course" the 60-year-old head coach told Sports Buzzer. "He looks very fresh and very agile, the joy can be seen in him. He needs that for his light-footedness, for his variability."

Low added on the weight of expectationwhich has hampered Gotze over the years:"Everything was always focused on him. He had a backpack on with the 2014 goal, which must have been a heavy burden.

"That's why I'm happy for him that he hasstarted so well in Eindhoven."

Low is currently preparing his squad for a friendly meeting against the Czech Republic on Wednesday, which comes three days before Germany resume their latest UEFA Nations' League campaign.

Die Mannschaft's next two fixtures in League A, Group 4 will see them take on Ukraine and Spain, with the latter currently sitting top of the pool by a single point.