We have to tell the truth of our history: the good and the ugly - Show Racism the Red Card marks 25th anniversary 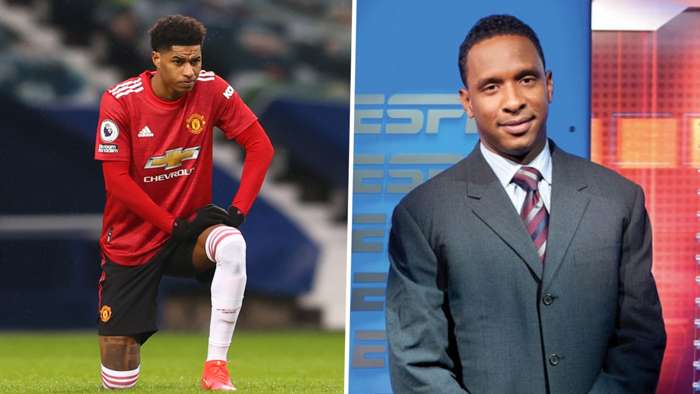 For many years, the powerbrokers of English football talked and acted as if racism was no longer an issue, or at most a marginal one. Recent events have shown that this couldn’t be further from the truth.

Whether it’s the scale of online abuse, or the paucity of black, Asian and minority ethnic representation in boardrooms and dugouts, football remains a profoundly uneven playing field.

In this context, the work of Show Racism the Red Card, which is celebrating its 25th anniversary this year, is as important as ever.

While former Premier League goalkeeper Shaka Hislop is one of the organisation’s founders, and it continues to use high-profile players and athletes to deliver its message, its work has a broader scope than simply tackling discrimination within football.

“We’re the UK’s largest education-based anti-racism charity,” says Hislop. “Over the last 25 years we’ve given 825,000 kids at least one days anti-racism training in one of our workshops. The aim is to cross the one-million mark in the next two years.

“We focus on getting kids to understand the history and the impacts of racism, how it affects their peers, and what they can do in addressing racism in their own environments.

"We also work very closely with teachers about how they manage their classes, and any incidents, and how they can better incorporate anti-racism work in their own lesson plans. Its pretty all-encompassing.”

The creation of Show Racism the Red Card stemmed from Hislop’s own experience of abuse while filling up his car at a petrol station near St James’ Park, during his playing days at Newcastle United.

A group of youths started shouting racist insults before realising who he was as they approached, and then requestedhis autograph instead. It was an alarming experience, starkly demonstrating the way that football can break down barriers.

"He was working with a group called Youth against Racism in Europe. A dialogue began. We were just talking about how we could use the profile of footballers to talk about racism and discuss the issues around it.

“We started with me and usually one or two of my Newcastle team-mates going to schools in the north east, talking to kids in assemblies, answering their questions and taking photos with them after.

“Ged’s done an incredible job over the years. Even though I moved to the US in 2006, I still remain involved, as I always have done. Over the last 12 months, in particular, it’s been easier for me to get involved, with so many of our meetings now online.

"It really has been incredible to see how the organisation has grown and the impact that it’s had. While I take absolutely no credit for it, it’s an honour to be a part of.”

The challenges facing anti-racism campaigners continue to evolve. Although incidents still occur, overt racist chanting has subsided massively, in Britain at least, but technological change means that the bulk of abuse no longer takes place in person.

Social media has exposed everyone, including those working within football, to the unfiltered and sometimes unpleasant views of millions of strangers.

Many black players and pundits have been subjected to horrific racist abuse simply for going about their lives and work. Wilfried Zaha, Anthony Martial, Yannick Bolasie and Ian Wright are just a few recent victims.

The sheer number of racist messages is dispiritingly huge, but those targeted have shown a determination to speak out and not be cowed into silence.

“That empowering of this generation of players comes from so many before them who’ve been willing to stand up," says Hislop. "The likes of Laurie Cunningham and John Barnes, despite having bananas thrown at him. Viv Anderson and Cyrille Regis, who was sent bullets in the mail, but still showed up and performed, and raised awareness.

“It’s been a long path for black footballers to be in the space where they are now, doing the good work that they are. I continue to applaud the work of Marcus Rashford and Raheem Sterling and so many others.

"But, at the same time, as the old saying goes, ‘If I can see further, it’s because I’m standing on the shoulders of giants.’ I think that applies here.”

Although proud of the progress that has been made since launching Show Racism the Red Card in 1996, Hislop sounds a note of caution.

“I think we’ve made significant strides forward in that time. But I also think that complacency can be our biggest enemy. If we become complacent about the work that’s gone on, and don’t continue to have discussions and raise awareness, then that’s a problem.

“I think you saw some of the challenges to that play out in front of our eyes in 2020. The world had stopped for the pandemic, and then the murder of George Floyd, and the resulting protest and equality marches, showed how important it is that we keep having these conversations at every single level as we push to have more accurate representation within history books and to tell the truth of our history – both the goodand the ugly.”

The tragic fate of George Floyd, a 46-year-old Black man who was killed in Minneapolis after having a knee pressed into his neck by a white police officer for more than eight minutes, sparked widespread outrage.

When football returned, players around the world started taking the knee as a protest against racism and social injustice, replicating the gesture first made by NFL quarterback Colin Kaepernick in 2016.

When fans were briefly allowed to attend Football League matches in small numbers, players at several clubs’ grounds, including Millwall and Colchester United, were booed and jeered for taking the knee before kick-off.

Responses to the booing veered from outright condemnation to muted sympathy. That only underlined the power of the gesture, which Hislop believes should continue, providing action follows.

“I think it’s important for us to keep raising awareness and keep having those discussions,"says the former Trinidad and Tobago international."I also understand the criticism too that, at times, it feels token. I think it feels token when there isn’t any further action. When it feels like football is happy to take the knee and wear the patches and do nothing else.

“There’s a real lack of diversity and I continue to advocate for the Rooney Rule as a solution to that. It doesn’t direct clubs as to who to pick, or create any quotas, but it opens the door to interview and to be present where decisions are being made. I think that’s an important step.