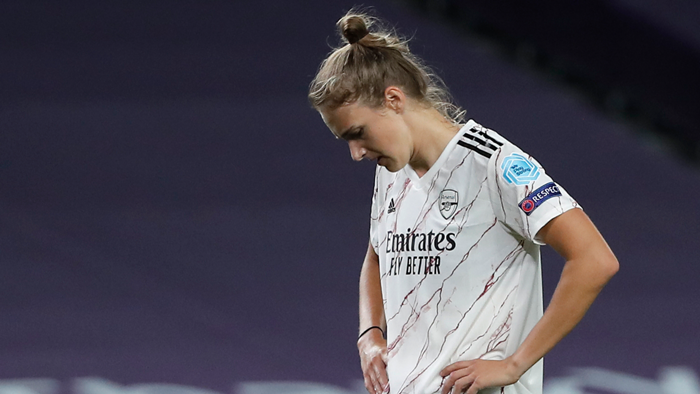 Arsenal manager Joe Montemurro says there are 'no excuses' for his side to make after their Women's Champions League exit at the hands of Paris Saint-Germain on Saturday night.

However, Signe Bruun netted a winner for the French side just 13 minutes from time as the match sharpness from their recent outings in the Coupede Franceappeared to pay dividends. Arsenal, on the other hand, hadn't played a competitive game since February.

"Big-game intensities, big-game scenarios, big-game physicality can only be replicated in big games, so the more games you play, the more you are used to them," Montemurro said after the game.

"We haven’t had any, but it’s not an excuse. It’s what we were given in terms of preparation, that’s what we had, we made the best of the situation and so be it.

"I’m still proud of the players, the planning, the preparation, the ability to really give it everything they could under the circumstances. The staff have been brilliant. We did what we could with the circumstances we’re given and we’re not going to make excuses for that.

"They’re a powerful team, they have powerful players.

"Obviously, having the opportunity to play two or three important games did prepare them a little bit better. That’s the reality, but I make no excuses for that because the players, in patches, played some good football and we just needed a bit more continuity with that and to expose them a little bit more."

There were only 15 minutes on the clock when Katoto fired PSG ahead, amidst poor marking from the set-piece, a goal that got the Gunners off to the worst start possible.

Bruun's winner then also came from a poor defensive error in the closing stages. However, Montemurro refused to "point fingers" at any of his players.

"It always is frustrating to concede from a set-piece, especially knowing the amount of work we do on set-pieces," he said.

"I don’t point any fingers for those things, they’re just moments in a game and we have to be better as a group.

"I think they got into very dangerous positions and we knew that they would do that because they play with numbers up top. We had to be a little bit smarter in terms of when we did retain the ball and we didn’t do that in the second half especially."

The defeat means Arsenal will not compete in the Women's Champions League next season, having needed to win this competition to do so after finishing third once the Women's Super League standings were concluded on a points-per-game basis.

But he believes there were positives to take into the new season, which gets underway in just two weeks' time.

"It’s a little bit fresh now and we need to review and be better.