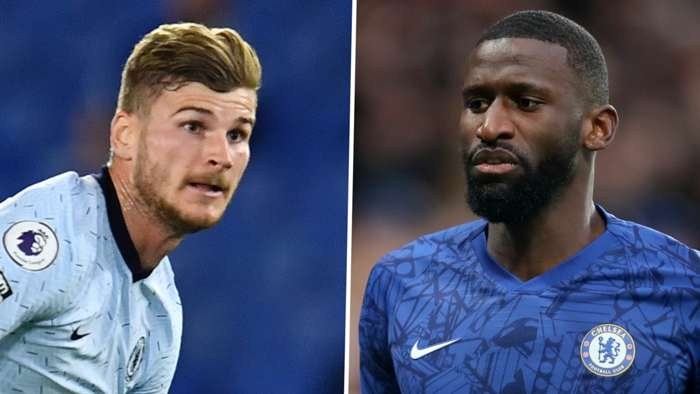 Timo Werner has admitted that Antonio Rudiger played a "very important" role in his transfer to Chelsea earlier this summer.

The 24-year-old established himself as one of the most prolific strikers in world football at Red Bull Arena, and he gave Blues supporters an exciting glimpse of his talents in the final third on his debut in a win over Brighton on Monday.

After Werner's arrival at Stamford Bridge was confirmed, Rudiger claimed to have acted as an agent in persuading his compatriot to swap the Bundesliga for the Premier League.

"We spoke a lot during the lockdown and once he told me he was interested in coming to England, of course then I did what I had to do," he said.

"It’s really important to have people who can speak your language and he helped me a lot in my first days here when sometimes I didn’t understand everything if the manager was talking too fast," Werner told the club's official website.

"When it was not so clear if I was coming here and I was talking to the manager and members of the club, he was important to me. To have a guy who was inside the team, he could tell me a little bit about the club – how are the people, the staff and the players, how is the feeling in the team, is everybody with each other?

"He told me it is very good and fun to play here, that it’s a very big club that wants to win and that can win because they have the facilities for that. In this part, he was really important."

The former Leipzig star says his baptism of fire at Brighton gave him a solid understanding of Premier League football, and helped him realise exactly how Chelsea will need to play in order to achieve their goals throughout the 2020-21 campaign.

"English football is very fast and there are a lot of different styles of football, sometimes with five or three at the back, sometimes like us with four at the back,"Werner explained.

"There are different systems and teams are different in how they play football – a lot of teams press high like Brighton did against us but other teams sit deep in their own half.

"In the end, it will be down to us and how we play our football because we want to keep the ball, take different positions, rotate, move and create spaces for other players. When we play good, a lot of teams will have to stay deeper."

Werner will be back in contention for a place in Frank Lampard's line up when the Blues play host to reigning Premier League champions Liverpool at the Bridge on Sunday afternoon.